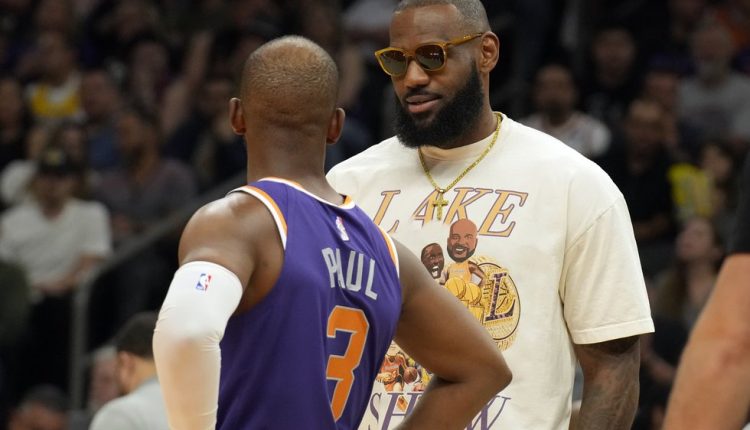 Third time’s the charm for making history for the Phoenix Suns. And it was against one of their biggest rivals. The Phoenix Suns notched their 63rd win of the season, which is a franchise record, by beating the Los Angeles Lakers on Tuesday night. The Suns started out slow but got hot in the third quarter, going on a 21-7 run and they never looked back. Devin Booker finished with 32 points, including six three-pointers. Deandre Ayton added 22 points and 13 rebounds.

The franchise had hit 62 twice before this season, once during the 1992-93 season and then during the 2004-05 season. The Phoenix Suns are undefeated against the Lakers this season and have won six of the last seven in the regular season. With the loss, Los Angeles is eliminated from the playoffs since the San Antonio Spurs beat the Denver Nuggets earlier Tuesday night. The Suns eliminated the Lakers in the playoffs last year.

It was a rough couple of games for the Phoenix Suns before finally getting win No. 63. The Suns faced a shorted-handed Memphis Grizzlies team but still lost 122-114 on Friday. Two days later, they rested Ayton, Booker and Jae Crowder against the Oklahoma City Thunder and lost 117-96. But the Thunder also only had one regular starter who played and outscored Phoenix 65-43 during the final 24 minutes. The Suns also shot a season-low 18% from 3.

But this time, Ayton, Booker and Crowder were back in the starting lining up. The Suns appeared to be sleepwalking in the first half when the Lakers actually had a 31-28 lead after the first quarter. But the Suns attacked the paint in the second quarter, shooting 11 of 16 from inside the arc. The team led by five at the half with Booker leading the way for Phoenix with 16 points. Ayton had 14 points and seven rebounds.