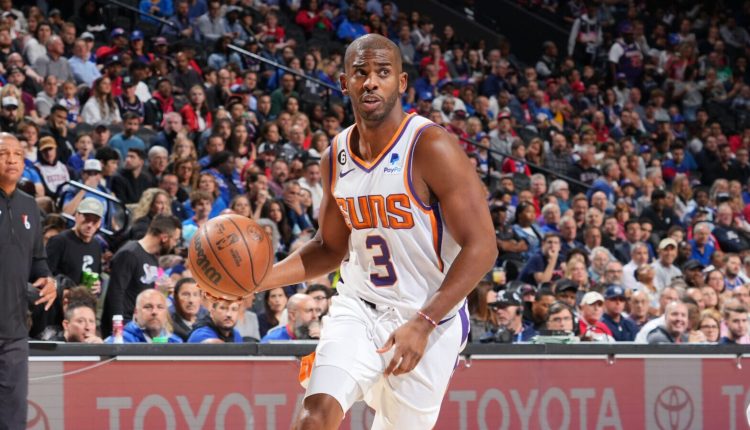 Chris Paul dribbles the ball against the Philadelphia 76ers on Nov. 7, 2022.

Chris Paul became the latest Phoenix Suns player to hit the injury report. The 12-time All-Star exited Monday’s game at Philadelphia with right heel soreness, the team announced during its 100-88 loss to the Sixers. Paul appeared to suffer the injury in the second quarter when he ran into an off-ball screen on defense.

Paul exited the game with two points and two assists in 13 minutes of action.

After the game Paul downplayed the severity of the injury, telling Duane Rankin of AZCentral, “I’m not worried about it.”

Chris Paul said if he could’ve played, he would have, but doesn’t see the sore right heel as a prolonged thing.

“I’m not worried about it.”

When asked if this was just a matter of being cautious, Paul said, “Yep.” #Sun’s #76ers

The Suns are already dealing with the absence of Jae Crowder (not with the team) and Cameron Johnson (meniscus surgery). Former no. 1 overall pick Deandre Ayton also briefly left Monday’s game with what appeared to be an ankle injury before ultimately returning.

Phoenix is ​​now 7-3, tied for second place in the Western Conference.