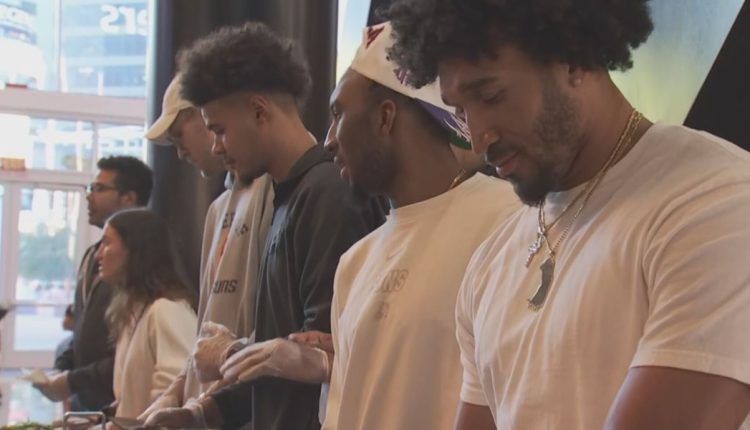 PHOENIX (3TV/CBS 5) –Dozens of parents and kids were hosted by the Phoenix Suns at the Footprint Center Wednesday night for a Thanksgiving dinner. The team brought out some players to serve fans in line.

Players served the families of local nonprofit leaders and people in need. Cam Johnson, Jock Landale, Ish Wainwright, Josh Okogie, and Damion Lee lined up to dish out some food. They also took pictures and signed some memorabilia for the fans.

At the same time, Cam Payne was hosting an event just outside the arena for his mentorship program. There was food, games and more fun for people in his program. He spoke and gave encouraging words to the kids in the crowd. “It’s like a blessing to see kids smile and achieve what they want to be,” Payne said. “You can achieve whatever, do whatever you want to do or be what you want to be.”

Payne also took the kids down to the court at Footprint Center to shoot around. They also raffled up some prizes later. The Suns also surprised the nonprofits at the event. They donated about $200,000 in grant money to nonprofits around the Valley. The money will go to help people in need.

The Suns will now begin their season of giving with more events and donations still to come. The team will announce those as they happen.