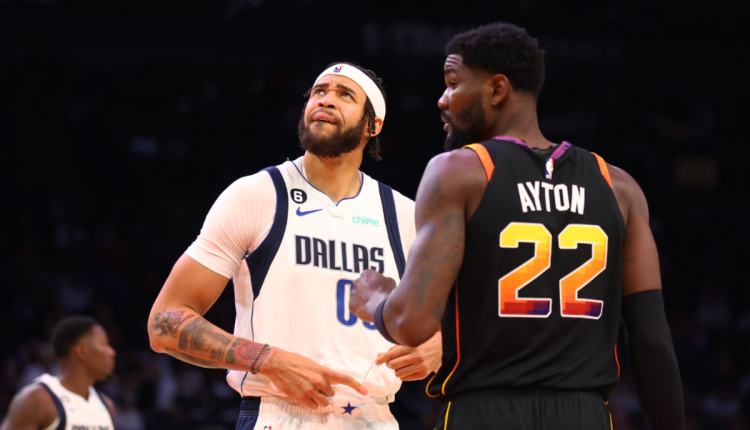 The Phoenix Suns had plenty of discussion around them throughout the course of the offseason. From the Kevin Durant rumors to Deandre Ayton speculation and everything between, there was no shortage of writing or reading material in the Valley.

Perhaps an underrated storyline was the loss of JaVale McGee, a player many within the Suns’ fandom wanted re-signed regardless of Ayton’s status.

McGee reportedly wanted a three-year deal worth way more than what the Suns were willing to shell out, and thus the two sides sought other avenues.

McGee played well during his time in Phoenix, and was rewarded with a 3 yr, $17.2 million deal with a Dallas Mavericks that had just humiliated the franchise in the postseason.

Thus far, things haven’t exactly panned out for McGee or Dallas, as Bleacher Report lists the acquisition as one of their five regrettable moves through the early parts of the season.

Here’s what Grant Hughes said on what’s been a disappointing start to the season in Dallas:

“The Dallas Mavericks used their best roster-building tool, the taxpayer mid-level exception, to give JaVale McGee a three-year, $17.2 million contract that came with a promised starting role. Oops,” Hughes said before later adding:

“On some level, McGee was a sensitive signing for the Mavs, who struggled to defend the rim during the 2022 postseason. But it’s difficult to justify using the TPMLE on a player whom nobody envisioned closing playoff games at center over the likes of Maxi Kleber , Christian Wood or even Dorian Finney-Smith in super-small lineups.Whatever value McGee might have provided as a paint-defender and rim-roller was never going to offset his limitations as a scorer and defender in space.

“The Mavs paid McGee as if they were getting the version who played bit roles for title-winners (and almost never factored into crunch-time lineups) for the Golden State Warriors and Los Angeles Lakers in his late 20s and early 30s. That isn ‘t who he is anymore, and giving even that version of McGee $17.2 million over three years would have been a stretch.”

McGee is currently averaging a mere 4.2 points and three rebounds in under ten minutes averaged per night. Simply put, he hasn’t been anything close to what Dallas had hoped for.

The Suns opted to match an offer sheet for Ayton, while also re-signing Bismack Biyombo and trading for Jock Landale. While Ayton will still have doubters regardless of performance, Biyombo and Landale have been quite good in the minutes they’ve seen.

It’s still too early to make any stamped declarations, but Phoenix sure does look like they were on the right side of things when it came to the decision to let McGee walk.

Devin Booker Says He Changed His Reputation Coming Into NBA