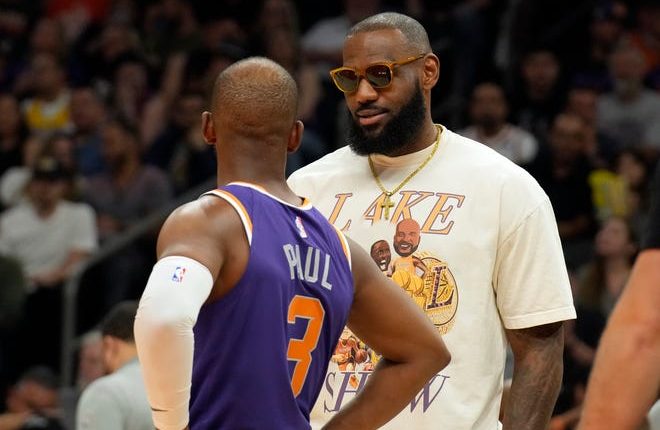 If the Phoenix Suns don’t acquire Kevin Durant in a trade, they have another option to land another NBA superstar, according to one NBA Insider.

The Ringer’s Kevin O’Connor ranked the best fits for the NBA star, should he “get a wandering eye” and seek a trade, and the Suns came in at No. 1 on the list.

Of James’ potential fit in Phoenix, O’Connor wrote: “LeBron is BFFs with Chris Paul and old friends with James Jones. The Suns want Durant. Wouldn’t they also want LeBron? Phoenix is ​​a great city itself, Arizona has lower taxes than California, and it’s just a short flight from Los Angeles. LeBron would get accused of riding coattails, but the Suns fell short in 2020-21, looked beatable in 2021-22, and are getting a little long in the tooth in 2022 -23.”

O’Connor ranked the New York Knicks No. 2 on his list of fits for the Lakers’ star, with the Portland Trail Blazers No. 3 and the Cleveland Cavaliers No. 4.

The Miami Heat were fifth, followed by the Golden State Warriors, Memphis Grizzlies and Atlanta Hawks.

The Philadelphia 76ers came in No. 9 on the list, which included nine teams.

O’Connor wrote that trading James could be “mutually beneficial” for the Lakers and the player.

“A return could be massive for LeBron, though less than what the Nets could receive for KD since James is on an expiring contract while Durant has four years left. A trade could set them up for more sustainable success than what can be offered by an aging LeBron on short-term deals and an injury-prone AD,” he wrote. “I don’t see the Lakers being the team that decides on its own to trade LeBron. It feels like something that LeBron would have to push for, and only then would the Lakers try to get everything they can for him, like the Nets are with Durant. But if GM Rob Pelinka and team president Jeanie Buss agree there is no path to a title with LeBron, and feel threatened that he could leave, then it could be mutually beneficial.”

LeBron James trade to the Suns?

Dreaming of James in a Suns’ uniform? Heavy.com’s Austin Boyd detailed why he thinks it would never happen, even if it makes “a ton of sense.”

He wrote: “The Suns make a ton of sense for LeBron. He’d get to play with his close friend Chris Paul on a championship contender. Paul, LeBron and Devin Booker would form a fierce trio. Deandre Ayton is also there but he would likely need to get moved in a LeBron trade. Adding the future Hall of Famer would easily make the Suns title favorites next season and perhaps for a couple of more. From the Lakers’ perspective, trading LeBron to the Suns makes no sense. They “‘ve already mortgaged their future for LeBron so trading him now doesn’t make much sense unless they get a great offer. Also, the Suns and the Lakers are rivals that share a border. Owner Jeanie Buss can’t love the idea of ​​LeBron being that close to Los Angeles if he’s traded. Anything is possible but the Lakers would likely look at other teams if they were to trade LeBron.”