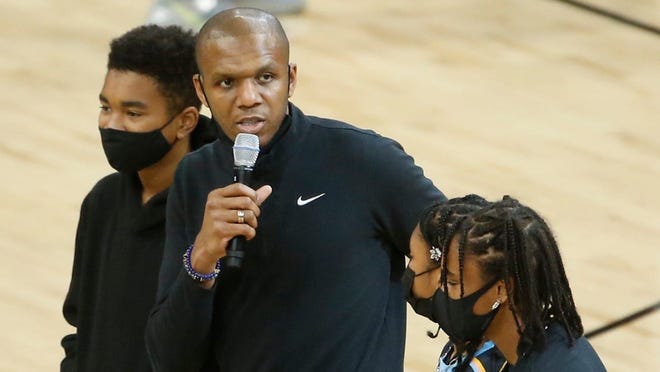 Phoenix Suns not expected to trade into Thursday’s NBA Draft

The Phoenix Suns currently don’t have a draft pick heading into Thursday’s draft.

“Don’t expect a draft-day trade, either, considering the Suns hardly want to break up a team still equipped to overcome their recent second-round flameout,” Medina wrote. “Instead, look for the Suns to address their roster needs during free agency.”

“You know me, I explore all options,” Jones said last month during an exit Zoom media interview.

Last year, Phoenix made a draft-day deal that sent its first-round pick to Brooklyn for Landry Shamet, who later signed a four-year, $43-million rookie extension that kicks in 2022-23.

“If there’s an opportunity to get back into the draft, we will,” Jones continued. “We’re going to use all the avenues to improve whether it’s the draft, free agency, summer league. You name it, we’ll be looking at it.”

More:Why Phoenix Suns don’t have any picks in 2022 NBA draft

The Suns sent four players with two being starters Ricky Rubio and Kelly Oubre Jr. and their 2022 first-round pick to the Thunder for Paul and Abdel Nader going into the 2020-21 season.

The move was a game changer for the Suns.

Paul proved to be catalyst for the Suns returning to the playoffs for the first time since 2010 and reaching the 2021 NBA Finals.

Phoenix followed that up with winning a franchise record 64 games in the regular season to earn the No. 1 overall seed in the 2022 playoffs, but fell short of returning to the finals.

Dallas eliminated the Suns in the Western Conference semifinals with a crushing Game 7 victory at Footprint Center.

A month later, they enter the draft with more on their plate outside of the draft starting with restricted free agent Deandre Ayton.

The top overall pick in the 2018 draft has averaged a double-double over the course of his four NBA seasons, but his season ended with a five-point effort in that Game 7.

He only played 17 minutes the 123-90 loss as Suns coach Monty Williams took Ayton out just 3:34 into the second half and never put him back in the game.

The two had an exchange on the bench. When asked after the game why Ayton only played 17 minutes, Williams said. “It’s internal.”

That may be the last image of Ayton with the Suns, who didn’t sign him to a rookie extension going into the 2021-22 season.

The Suns can match any offer sheet from any team, but they could also do a sign and trade with the 6-11 big man, who averaged 17.2 points on a career-best 63.4% shooting and 10.2 rebounds last season.

“All signs point to Ayton departing in free agency,” Medina wrote. “The Suns might retain JaVale McGee and/or Bismack Biyombo so they at least have some size to fill Ayton’s roster spot. But look for the Suns to perform a sign-and-trade with Ayton to pursue more wing and backcourt depth.”

While Paul has been a big-time addition, most of Phoenix’s core group came through the draft.

The Suns drafted Devin Booker 13th overall in 2015. Becoming one of the game’s best players, Booker made All-NBA first team this season.

Mikal Bridges and Ayton were 2018 lottery picks. Bridges finished second to Celtics guard Marcus Smart for the league’s defensive player of the year award while Ayton averaged a double-double for a fourth straight season.

Cam Johnson was one of three finalists for the NBA’s Sixth Man Award this season after being a surprise lottery selection in the 2019 draft.

The Suns didn’t have the same success with Jalen Smith in 2020.

More:‘Plays with no fear’: Draft sleeper Marcus Weathers fueled by passing of his mom

Taking 10th overall out of the Maryland, the 6-10 hardly played a rookie, showed flashes of potential his second NBA season, but Phoenix traded him to Indiana right before the trade deadline to bring back Torrey Craig.

Now the Suns enter this draft without a pick.

That could change Thursday night, but Medina doesn’t think it will.

Have an opinion on the current state of the Suns? Reach Suns Insider Duane Rankin at [email protected]gannett.com or contact him at 480-787-1240. Follow him on Twitter at @DuaneRankin.

Medical Bills Can Shatter Lives. North Carolina May Act to ‘De-Weaponize’ That Debt.

Watch: She Almost Died. The $250K Debt Took Their House.