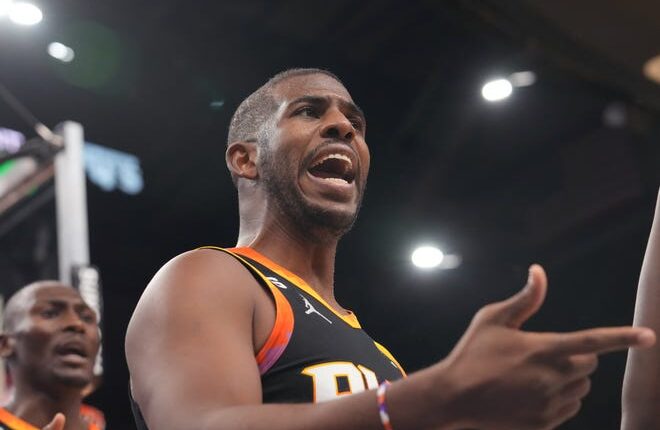 Chris Paul revealed in seven words his mindset for Wednesday’s showdown against Boston (20-5) at Footprint Center.

“I’ve got to get this body ready,” Paul said after the morning shootaround.

Paul will return to action for the 8 pm game after missing Phoenix’s last 14 games with a sore right heel.

He was originally listed as questionable for the West-leading Suns (16-8), but team officials announced him available a little after 6 pm

The 37-year-old Paul was doing resistance work after shootaround and had assistants Jarrett Jack and Brian Randle putting him through some on-court work to test his movement.

“There’s a lot that goes into it and I’m just grateful for our staff, J-Jack and everybody that is helping me get back,” Paul said.

“Just trying to push it,” Paul said. “The fellas have been playing so many games, I haven’t really had a chance to practice and have like a real 5-on-5.”

Torrey Craig has been upgraded from questionable to available after being sidelined for Phoenix’s last three games. Like Paul, Craig went through resistance training after shootaround as well.

“It feels pretty good,” Craig said. “Just trying to test it out and stretch it out. Run full speed. Do a couple of things live. Just been out there playing ones and working out. It felt pretty good.”

Craig suffered the injury during Phoenix’s win Nov. 30 over Chicago.

“It was just something I just felt,” Craig said. “I kept trying to play through and after the game, felt it a little bit more. Went and got it checked out. It was just a minor strain. Been during rehab every day, getting it back stronger, trying to protect it. It feels pretty good.”

As for Paul, when asked to describe how the pain feels in the heel, he said, “I’m working through it.”