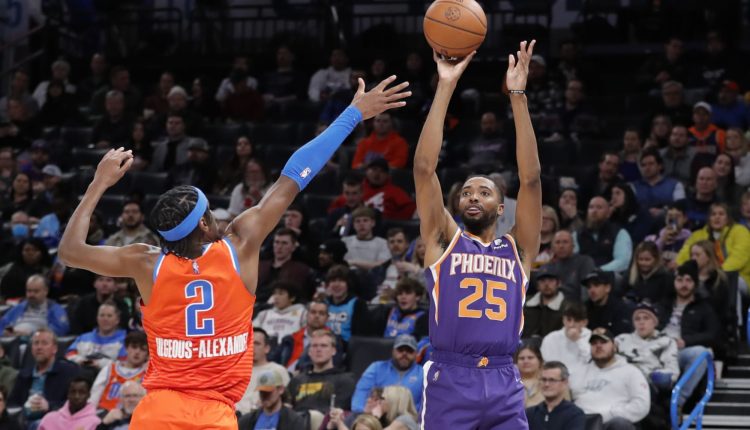 If Phoenix Suns fans were hoping the franchise would get their hands on Oklahoma City Thunder guard Shai Gilgeous-Alexander, then optimism may be floundering after the 24-year-old’s comments at media day earlier in the week.

As another playmaker and shot creator, Gilgeous-Alexander would be a perfect fit in The Valley. It was an idea proposed on this site nearly a month ago, and one ESPN’s Zach Lowe mentioned soon after.

Shai Gilgeous-Alexander appears set to remain at Oklahoma City Thunder for the long haul, at least according to his comments from media day.

Gilgeous Alexander was asked about his future despite only now beginning the first of a five-year, $179.3 million contract. Unsurprisingly, he was buoyant on his team’s young core and the future their building.

“It’s not fun (losing). With that being said though, I know what I signed up for when I signed a five-year extension… and I don’t think we’re gonna be losing for much longer. It’s not like I signed up to lose. I believe in this team.”

Despite those comments, a recent report from TSN Canada suggested the Toronto Raptors were closely monitoring Gilgeous-Alexander’s situation in Oklahoma City.

While Toronto holds greater connection given his Canadian nationality, one would expect over half the league would be interested in adding someone of Gilgeous-Alexander’s talents. The combo guard put up an impressive 24.5 points, 5 rebounds and 5.9 assists in his 56 games last season.

Having missed out on Kevin Durant for the moment, and with a lack of playmaking and shot creation outside their two All-Star guards, there’s little doubt Phoenix would also be keeping a watch on Gilgeous-Alexander’s future.

Although he may be saying the right things now, Gilgeous-Alexander’s perspective could change significantly once the season starts. With prized draft pick Chet Holmgren already out for the season, the Thunder appear set for another rebuilding season. If there’s even an inkling of discontent there at any point, then the Suns should be ready to pounce.