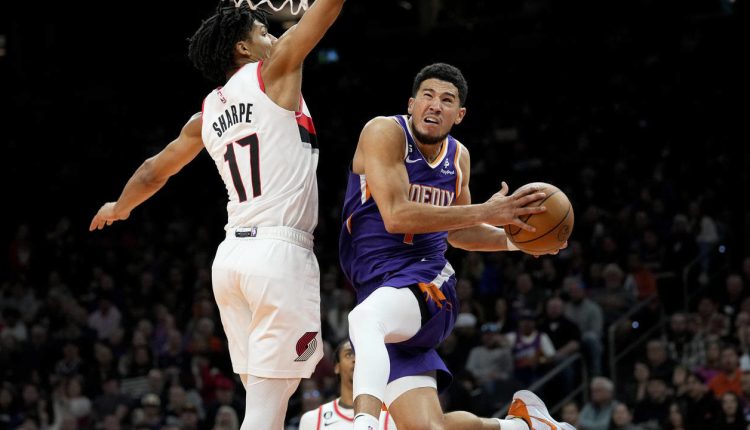 PHOENIX — The Phoenix Suns are at their best when they are playing a collective and together brand of basketball on both ends, something they do better than just about anyone else in the NBA.

It is what they will need to rely on now more than ever while Cam Johnson (meniscus) heals up. Game 1 was a good start, a 102-82 win Saturday over the undermanned Portland Trail Blazers.

Phoenix, quite frankly, looked how it should against a Portland team missing Damian Lillard (right calf strain) and Anfernee Simons (left foot inflammation) for the second straight night after a bad 108-106 Suns loss on Friday. They played like they knew that was the case.

“I’ve said it before, we have a team full of sore losers,” head coach Monty Williams said. “We just knew the way that we lost last night we were going to get an intentional effort tonight on both ends.”

The Suns had that level of intent to their play, which started with forward Torrey Craig, the replacement for Johnson in the starting lineup.

“It’s been good,” Williams said of Craig starting. “He’s been thrown into a number of situations with us and I thought his energy tonight was great.”

Craig had five points, two rebounds, using the right blend of aggression with the right decisions on the ball while filling in the gaps where he normally does off it.

Everyone had a similar mindset. The bench came in after some big-time struggles Friday without Cam Payne (left foot soreness) but looked fine in its second turn with him sidelined.

In the middle of that was the best the Suns have been all season on offense from a movement perspective. All five players were gliding around and putting constant pressure on the Blazers defense while knowing who was where.

Phoenix had six players with at least five points in the first half, and it sure helped that the leading scorers were Devin Booker (16 points) and Chris Paul (13) at the helm of the offense. That 13 was a season high in the first half for Paul.

The 21-point deficit for Portland was too much to overcome and a completely different story than Friday. That was a Blazers team that got a 15-point lead with some confidence and was able to rely on its solid defense to keep the Suns from taking back control.

The Suns, as expected, had a bit of a chip on their shoulder from the loss a night prior and kept their foot on the gas through to the finish. After 26 points for the Blazers in the first quarter, they produced 14, 21 and 18 in the remaining three, respectively.

Phoenix attempted 22 free throws through three quarters before garbage time and for the game racked up seven steals and 14 blocks.

Booker was the man on a mission among all others with how he was approaching the game. Across 29 minutes he had 24 points, three rebounds, three assists, a steal and two blocks on 9-of-20 shooting.

Craig was a factor in holding Blazers forward Jerami Grant to 4-for-10 from the field after Grant scored a game-high 30 points on Friday.