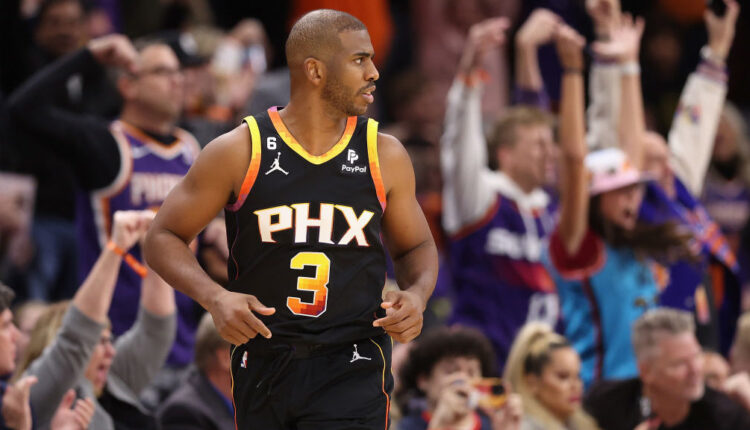 Chris Paul #3 of the Phoenix Suns reacts to a three-point shot against the New Orleans Pelicans during the second half of the NBA game at Footprint Center on December 17, 2022 in Phoenix, Arizona. The Suns defeated the Pelicans 118-114. (Photo by Christian Petersen/Getty Images)

Phoenix Suns point guard Chris Paul is probable to return to action Sunday against the Memphis Grizzlies at Footprint Center after missing the last seven games with right hip soreness, the team announced.

Paul has played in 26 of 47 games this season after the 37-year-old was out for 14 games earlier this season with a heel injury.

Paul is looking to join Cam Johnson in rotation following the wing’s return from a torn meniscus on Thursday, Johnson did not play Saturday night against the Indiana Pacers but is not listed on the injury report for Sunday’s game. He was out since Nov. 4 before making his return.

Paul had been finding a rhythm before his latest ailment having averaged 17.3 points on 50% three-point shooting and 8.5 assists per game over his last 11 full contests. The Suns went 4-7 in those, but they were 2-6 without Booker in that span.

Ayton was ruled out Saturday with a non-COVID illness and will miss his second straight game.

The Grizzlies’ injury report is clean aside from guard Danny Green, who has been out all season while recovering from knee surgery.

The Suns can win a third straight game for the first time since Dec. 19 on Sunday, but the Grizzlies have been one of the league’s best teams since the calendar turned to 2023. Memphis is 9-1 over its last 10 games and is coming off a tough 122-121 loss against the Los Angeles Lakers.