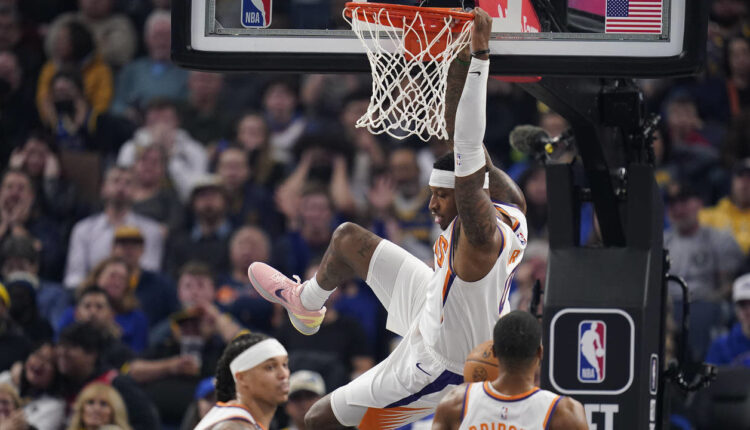 After making it look formulaic with 64 last year, the Phoenix Suns have been desperate for just one, measly win.

Any semblance of momentum, finding their footing, getting in a groove and so on would greatly aid them across a 4-14 stretch since Dec. 5 plagued by significant injuries. They needed that type of lift.

Following a handful of ugly, brutal losses across that stretch, Phoenix finally was able to relocate its effort the last three games, albeit in three defeats that made it nine in their last 10.

But it was just a matter of time until that desperation showed on the court in a way that did result in a win. I don’t think anyone would have penned it coming for the Suns on Tuesday, though, without Deandre Ayton (left ankle sprain), Devin Booker (left groin strain), Jae Crowder (not with team), Cam Johnson (right meniscus tear ), Chris Paul (right hip soreness), Cam Payne (right foot sprain) and Landry Shamet (right hip soreness).

Even more so, against a Golden State Warriors team with their starting lineup healthy for the first time since Dec. 5, that same day when things began to spiral for the Suns.

And yet, it’s basketball. The game has to be played, one that isn’t all that complicated. The Suns, ready to scratch and claw for a victory, dared the warriors to grind with them for it. Golden State declined until it was too late in a shocking 125-113 Suns win.

Phoenix showed its intent from the jump, leading by five in the first quarter. To be honest, that might have been the most surprising turn in the game. The Suns since that 18-game tailspin began were -81 in the first quarter, by far the worst mark in the league, 22 points worse than the San Antonio Spurs in 29th at -59, per NBA.com.

Golden State (20-21) didn’t adjust its urgency in real time, and even when the Suns (21-21) were missing, they were hammering the offensive glass to get free ones where they could.

The Suns led by 14 at the half, extending it to as big as 27 in the third quarter, assuring the warriors they would need to really chase the game to come away with it. Phoenix had 98 points through three quarters, matching its highest point total for any of the last four games.

The Suns’ offense didn’t have a point guard, nor a focal point. Phoenix, essentially, just ran its offense through normal movement and took what Golden State’s defense gave them.

It sounds simple because it is! The secret sauce is the right decision-making processes unfolding through constant decisiveness. If that gets done every possession against a lethargic defense, good results will soon follow.

You would have tabbed this game as the Suns spotlighting Duane Washington Jr. or Mikal Bridges in the offense, getting them 15-plus shots as the two lone guys capable of creating one on their own. And while they would, it was because the gears were fully churning and they both were fearless in attacking the warriors’ defense.

That flow works best through players like Dario Saric, awesome passers who are incredibly smart with the choices they make. He has largely looked unlike himself this season after coming back from an ACL tear but he at long last looked like the guy we talked about as a key over the summer.

He made intuitive plays with the ball over and over again in the connecting role he has thrived in prior to this season.

But eventually, when the game is on the line, it does come down to those primetime players. The Warriors brought this on with a few separate surges in the fourth quarter.

Bridges was turned to for most of it, and my goodness, the warriors trapped him! I’m not sure Bridges has been double-teamed that much in his basketball career, even going back to college. He got to learn on the fly, and so did Washington.

The Warriors got within 15 at 10:38 to go, but the Suns held strong, getting back up 17 at 4:30 remaining. Andre Iguodala’s ejection signaled we had reached the point in our proceedings where the Suns push the opposition to its breaking point, a signature of a Monty Williams squad, but Stephen Curry had other ideas.

In his first game back since missing 11, Curry scored the Warriors’ next 11 points. But even after he assisted a Klay Thompson 3, Golden State couldn’t get enough stops and still trailed by 12 with a little over two minutes on the clock.

Then the Suns’ limitations without any ball-handlers really showed. The warriors went from pressing the person bringing the ball up and trapping bridges to deploying a full court pressure. That forced three straight Suns turnovers for seven of the Warriors’ 25 points off turnovers, making it 117-111 Suns at 88 seconds left. The Suns had 13 of their 22 turnovers in the fourth quarter.

The problem is the warriors’ comeback was fueled by defensive intensity, something they had nothing of to start the game. That overclock had them fouling Phoenix the rest of the way, and Damion Lee knew exactly what he was doing against his former team on the night he got his championship ring.

Lee knocked down six straight free throws on three separate trips to give him a career-high 14-of-14 mark at the line and ice the win of the season.

He ended up with a season-high 22 points, improbably one of four suns with at least 19 points. Washington had 21 while Saric’s fantastic line of 19 points, 10 rebounds and seven assists was matched by Bridges and then some.

Bridges posted 26 points, nine rebounds, five assists, a steal and three blocks in 41 minutes. He was even better defensively, where we saw that Defensive Player of the Year candidate type of performance more than ever, a level of contribution that hasn’t quite been there as much this year. Bridges and Torrey Craig, who was questionable coming into the game, have both been laboring and could have easily joined their teammates in street clothes due to injury.

But Craig was flying around just like Bridges, snagging a game-high 14 rebounds. Phoenix won the battle on the glass 57-45 thanks in large part to his effort and had 25 second-chance points.

Thompson’s 29 points was the Warriors’ only real source of offense before Curry (24) and Jordan Poole (27) led the charge in the comeback attempt.