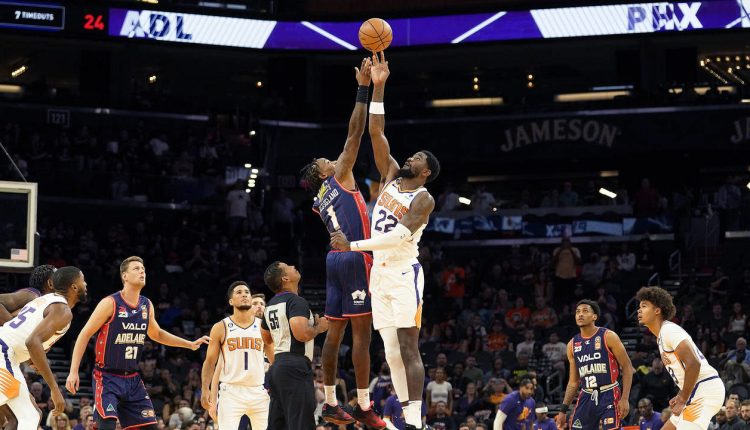 PHOENIX — It’s rare that much is made about a preseason NBA game. When a team from Australia’s National Basketball League (NBL) wins one of those games, that qualifies.

The Phoenix Suns lost to the Adelaide 36ers 134-124 on Sunday. Reactions have varied.

“These are things we feel like we have to do to become a better team,” he said Tuesday. “That’s why the other day didn’t bother me. I’m always the worst loser ever but I saw things that weren’t comfortable but we have to go through it so that we can be a better team.”

Williams noted how the situation escalated against a well-coached team that played hard and got incredibly hot, which, as Williams said it, put stress on the Suns’ habits.

The coach’s key in practice was “habit stamina,” a new phrase to add to the Monty-isms we’ve come to appreciate from the well-spoken head coach over the last three years.

“I just said it to the guys. They’re probably scratching their head every time I come up with another phrase,” he said.

Shooting guard Devin Booker expanded on what he takes from hearing that phrase.

“I think just stressing the details,” he said. “I think that’s what a lot of it comes down to. Things that you might get by with in the regular season or training camp or sneak away with a win here but might come and bite you in your [expletive] later when it matters. So building those habits at all times, from any drill.

“From a shell drill to 5-on-0 to a preseason game to a regular season game on, just keeping it consistent and holding ourselves to a standard and never going lower than that.”

Williams noted a pocket of Sunday’s loss from the late first quarter into the second quarter when some things like transition defense and fouling shooters were inconsistent.

The preseason and a good chunk of the real deal will naturally be a bit rocky offensively if they continue to try and incorporate more of Mikal Bridges and Cam Johnson as initiators, which they should.

Williams said if he had to give a level on a 1-10 scale of where using Chris Paul off the ball more is at, it’s a 3, and that more has to do with all the extra wrinkles the Suns have to get down more than how it looked on Sunday.

He also referenced how the team’s occasional zone look defensively will be going from a 2-3 to a 3-2, a tweak that will force Phoenix to recalibrate some of its principles in that change-of-pace look.