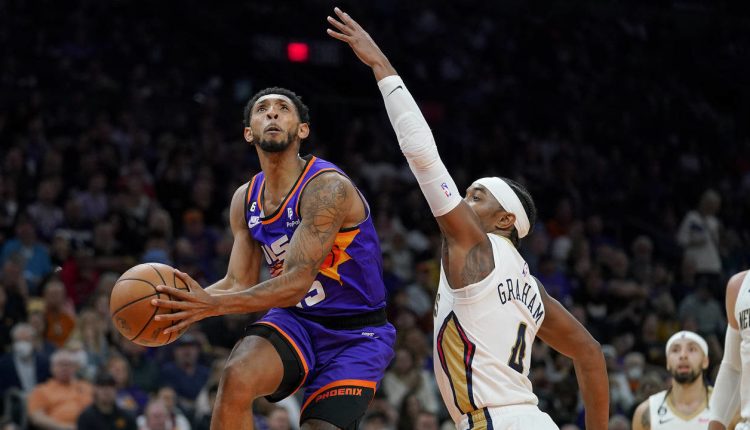 PHOENIX — A shorthanded New Orleans Pelicans squad on Friday was able to prove why it was such a pain for the Phoenix Suns to get by in the first round last year.

Through three quarters, Suns guards Chris Paul and Devin Booker combined for six assists, eight turnovers and 23 points. New Orleans was 13-for-31 (41.9%) from 3-point range and had all five starters in double figures to bring enough offense to the party.

It would only last for so long, though, as an 18-5 run for Phoenix to close the third quarter finally put enough distance between itself and the Pelicans in a 124-111 win.

Pelicans head coach Willie Green ran the traps that worked well on Booker last postseason, and they did again. Paul was ineffective against Green’s game plan for him as well. Center Deandre Ayton left the game after seven minutes because of a left ankle sprain and didn’t return.

But the Suns’ (4-1) supporting cast did enough to keep the Suns in it before the tide truly changed.

Mikal Bridges scored a game-high 27 points on 11-of-13 shooting with four assists and three blocks. Cam Payne was terrific off the bench with 12 points and five assists and Torrey Craig was too. He added 13 points and six rebounds in 16 minutes.

New Orleans’ (3-2) defensive pressure did its job in disrupting the Suns’ flow but was too overbearing at times, allowing Phoenix to get to the foul line for a 17-of-19 mark through three quarters.

“We scored early and then they came out and they were a bit aggressive and they had us on our heels and the ball just stopped moving,” head coach Monty Williams said. “And then we just started attacking the paint and maybe using their aggression against them.”

That and 60 points in the paint let the Suns make up for some rare off-nights shooting the ball in the midrange (44%) and from deep (30.3%).

The 18-5 run in the last 4:23 of the third quarterback finally had one team seize control, with a 10-point Suns lead, after 14 lead changes and seven ties.

Bridges knocked down his open shots, got out in transition and found space to score when the moment called for it, all while containing New Orleans’ CJ McCollum to 6-for-19 shooting. His last game in Footprint Center against the Pelicans was a master class in Game 5, and this was no different.

Payne has been solid to start the year and on Friday he really found his rhythm as a ball-handler using his speed to get to his spots to score and playmake for his teammates.

“From the first couple of games, just playing with a faster pace, a lot of things open up,” Payne said of what has been working for him.

Ditto for Craig in terms of his beginning to the season, and when he’s hounding the offensive glass while hitting his 3s, he’s a real force off the bench.

“I thought Torrey was phenomenal setting the tone in the first half,” Williams said. “He just kept going and going.”

Those three together made it possible for the Suns’ offense to keep up until their team play finally synced up, which clicked together on the aforementioned run.

Most of that was the rest of the bench. as the lowest +/- amongst Payne, Damion Lee and Jock Landale was Payne’s +16.

“They just play with aggression,” Williams said of the bench. “Sometimes, you think of aggression, you’re just jacking up shots but I thought the screening was at a high level with Jock and Biz. Defensively, we were scrapping after 50/50 balls. Torrey’s rebounding, Landry fighting over screens — those kinds of things for that group can help them have 50-plus points, which isn’t typical of that group but I just told them that tone of aggression that they set [is] a bar for them.”

Booker got nearly eight minutes of rest in the fourth quarter and the Suns’ lead grew from 10 to 13, a rare sight. In total, the Sun’s bench recorded 54 points.

Bismack Biyombo started the second half in place of Ayton and grabbed 13 rebounds in 23 minutes to go with 11 points.