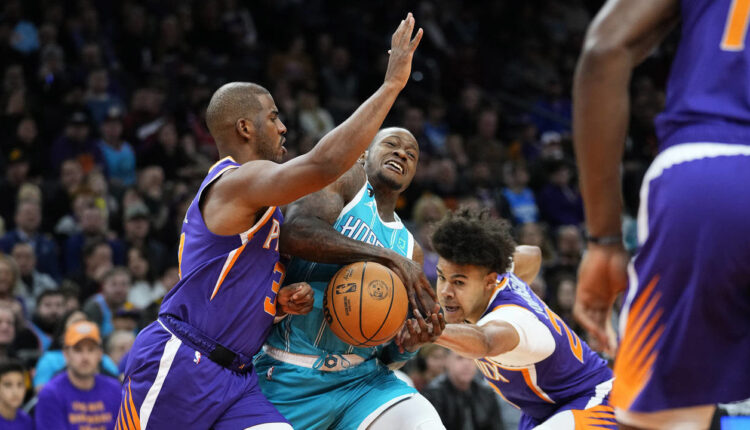 PHOENIX — The Phoenix Suns just got back to winning, so a fairly clinical victory in the middle of a streak was a once familiar feeling that was now foreign.

Even in their shorthanded state, the Suns were able to take care of business against a reeling Charlotte Hornets club Tuesday in a 128-97 win.

There is a strange mix of both no margin for error and freedom to control your own destiny in the Western Conference standings as we approach 30 games to go.

It sounds a bit cliche but it really comes down to the Suns just focusing on themselves and playing their brand of basketball consistently. If they do, they’ll shoot up the standings, just like they are right now after four straight wins.

“Yeah, exactly. That’s exactly it,” wing Cam Johnson said of that notion. “And we don’t even have our full team yet. …I think we just gotta keep doing what we’re doing. Focus on concepts, not getting too loose and staying locked in to what we do. That’s how we got a lot of wins last year. We were very consistent with what we did.”

That makes matchups like Tuesday’s a dramatic 180-degree turn when it comes to how we used to view them.

“We still got a ways to go but we understand we was in a situation last season where we ain’t really have to look at the standings or nothing like that,” Paul said.

From an outside perspective, what used to be a shrug at the Hornets coming into town is now as close to a must-win game as you are going to get in the final week of January.

Even though the Suns are still down Deandre Ayton (non-COVID illness), Devin Booker (left groin strain) Jae Crowder (not traded yet), Cam Payne (right foot sprain) and Landry Shamet (right foot soreness), it’s a game they were heavily favored to win and needed to.

Phoenix’s start was an encouraging sign of the type of attentiveness that requires.

The Hornets’ energy wasn’t there, nor was their execution. Phoenix was able to run through its fundamental offense and find their primary reads open most trips down the floor.

Johnson confirmed that aids a team’s rhythm even more.

“It’s stuff that we know we can do, it’s stuff that we can go to,” he said. “We understand reads and stuff off of every play call and everybody’s just on the same page so the organization is a lot higher level than when we are in a little bit more of a scramble.”

When an NBA defense doesn’t even challenge an offense to force more beyond what is programmed into its standard actions, that squad is going to have a long evening.

One of the first possessions of the game informed us of where the night was headed.

Charlotte center Mason Plumlee was defending the Suns’ Bismack Biyombo and allowed Biyombo all the space in the world for an eight-foot hook shot. Alright, fair enough. Might want to at least challenge him but I get it.

When Biyombo missed, though, Plumlee’s lack of physicality let Biyombo simply get his own miss. From there, Biyombo would this time nail his patented hook shot, without much resistance again.

“The ball movement tonight,” head coach Monty Williams said of what worked. “Obviously, when you get 37 assists you gotta make some shots and we did tonight. I loved our defensive intensity to start the game. It sets the tone for us.”

Charlotte desperately missed the ball and gave off Suns vibes with how much it lacked in terms of ball-handling. Taking the ball out of the bucket a lot didn’t help.

Phoenix, though, has been unable to deny making its last three wins dramatic, even after being in control of all three and being positioned to ice it early.

That fact reared its head in the mid-second quarter.

The Suns led by as many as 30 but gave up a 26-5 run that bled over into the beginning of the second half. It was an eight-point game after the Hornets’ zone stalled the Suns out.

But Phoenix didn’t let if get any more interesting than that, quickly buffing its advantage back to 15-plus in the early third quarter and keeping it there the rest of the way. Its 22-for-40 (55%) mark from 3-point range helped make that possible.

Johnson made all six shots he attempted in the first quarter, including four 3s he drained in the game’s opening 4:13 of action.

“To see that ball come off his hands as easy as it did tonight was pretty cool,” Williams said of Johnson. “When he’s making shots like that, it opens it up for everybody else.”

Still on a minute restriction, Johnson was able to keep that rhythm across his 18 minutes for a team-high 24 points on 9-of-11 shooting.

A game after Paul’s return, his body movements were all providing good signs again that he’s as healthy as we’ve seen him all year. He ended up with 14 points, five rebounds and 11 assists, showing comfort in getting to his midrange spots.

Another occurrence for the second straight game was great minutes from the backup bigs. Dario Saric is right alongside Paul in physically looking much better lately and Jock Landale’s finding his long distance accuracy.

Saric’s 19 points in 24 minutes marked the fifth straight game in which he’s scored in double figures when playing at least 20 minutes. He added eight rebounds and three assists while Landale scored 15 points.

At center, Biyombo is a big reason why the Suns have been able to go 9-1 without Ayton. Biyombo’s rim pressure and deep seals early in the game were huge for that hot start.

“The intensity that he plays with, it gives everybody energy,” Williams said of Biyombo. “He’s going after shots, he’s going after loose balls — he’s 6’8″ and he’s down there playing against guys that are 6’11”, seven feet tall and you can’t tell.”

Mikal Bridges came up short of his sixth straight game of 20 plus points with 18 in 30 minutes but the foot stayed on the gas with a 7-of-16 shooting performance. You can see the long-term vision of how his newfound flow can help the offense maintain stability.

Phoenix can mix Bridges in early or let the likes of Paul, Booker and Ayton locate a rhythm first. But once Paul goes for his typical rest around the six-minute mark of the first and third quarters, with Ayton and Johnson soon following, that’s when Bridges (alongside Booker) can really start establishing himself. Booker will welcome the help as a primary initiator and has been watching Bridges’ growth firsthand from the bench. Once those two rest, a combination of the prior trio (Ayton/Johnson/Paul) is mixed back in.

In the first eight games when the Suns were whole, Johnson was subbed out a lot earlier so he could feature more with the second unit plus Paul lineups at the start of the second and fourth quarters. Like Bridges, that’s when Johnson can get on the ball more too. Johnson already has a solid foundation to come off in those looks with Paul, since he was a Sixth Man of the Year finalist last year and was featured there prior to this season.

All that is said to keep an eye on how Bridges and Booker further build chemistry in those minutes once the First Team All-NBA guard is back, and how those Paul/Johnson minutes with the second unit look after Johnson’s minutes restriction is lifted.