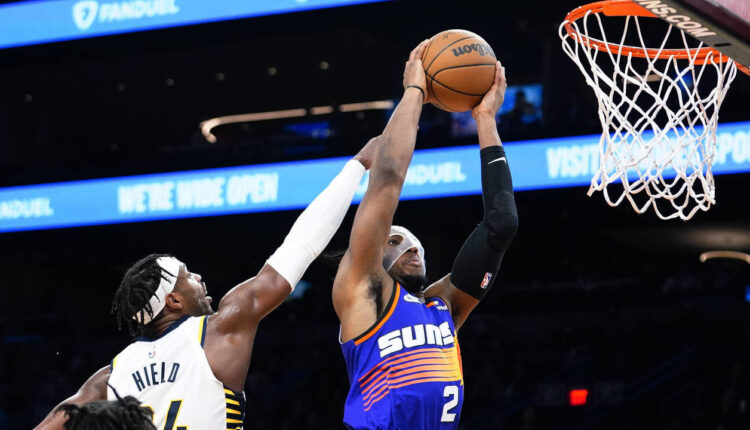 PHOENIX — The Phoenix Suns have been criticized time after time for their lack of needle-moving roster moves the last two years and I’ve been right alongside in dishing it out.

It stings for the team particularly this season, but with that said, the Suns still deserve credit for once again nailing some additions within the margins toward the back end of the bench.

President of basketball operations James Jones has not only been able to consistently find his types of players but gets guys who help the Suns win basketball games. Sure, they won’t be true difference-makers deep in the postseason, but can they swing a playoff game potentially? Absolutely.

A few of them were big-time contributors in Saturday’s 112-107 win over the Indiana Pacers, making it two in a row and Phoenix’s first winning streak in over a month.

This was a fun and tight game throughout, one Phoenix was unable to create much separation in with perhaps its most shorthanded roster to date.

The Pacers, now losers of seven straight, were always going to be in their own challenging position without Tyrese Haliburton (left knee and elbow sprains).

Statistically, this game didn’t offer many takeaways across numerous categories. The Suns led for just about all of it but the point differences by quarter were two, zero, two and one.

Phoenix was up eight with under three minutes to go and that was just enough of a cushion against an Indiana squad on the second game of a back-to-back.

And if one of the following performances we’re about to go over wasn’t there, the Suns would have lost.

“We’ve been talking about that margin for error when you don’t have a full complement of players,” head coach Monty Williams said. “Everybody has to be able to step up and when you’re on the floor you gotta be productive.”

At the start of the Suns’ extended skid, fifth-year wing Josh Okogie had 28 points in a blowout loss against the Boston Celtics. To that point, his role had been inconsistent, but the energy he brought in that game was clearly something the Suns needed on the floor to bring some juice.

Since then, he’s played like a true rotation-caliber guy on a playoff team, all while his 3-point shot remains a non-factor.

As we covered heading into the year, Okogie is simply an elite defender. What at least I didn’t know on a game-to-game basis was how much his motor can do in the other areas of the floor. Whether it’s an offensive rebound, loose ball, transition take or what-have-you, he really fills it up.

Williams was asked about the 50/50 balls the Suns came up with and he started his answer with, “Josh Okogie.”

Josh Okogie skies in for the tip! pic.twitter.com/Q5vsPGtcD1

Saturday was one of those games where it felt like Okogie was absolutely everywhere, all while playing his first game ever with a mask due to a broken nose.

“He just does everything on both sides of the floor,” Bridges said of Okogie. “We always know what he does defensively but just how he’s grown confidence-wise offensively, it just helps us so much.”

Okogie finished with a team-high 24 points off the bench, plus 10 rebounds, four assists, a steal and four blocks.

Okogie came in as someone unafraid of contact who will draw fouls, and that skill has come to fruition in a trying time for Phoenix when it comes to generating rim pressure and free throws. He was 11-of-15 from the line, with the 15 attempts tied for the most by a Sun this year (Booker did it twice).

Fittingly, that eight-point lead was the byproduct of an Okogie 3 with the Suns up five.

Josh Okogie is on another level tonight. pic.twitter.com/QiRZy131SI

Damion Lee was the one guy of this bunch that had the best chance to crack the playoff rotation and that’s because he’s just solid all across the board. The unforeseen variable this season has been his shooting, where a fine 36.6% shooter from deep in Golden State has blossomed into a league-leading 48.9% marksman for the Suns.

But other than that, again, he’s just solid. In this current situation when the Suns don’t have a point guard or lead ball-handler, he can be the guy to make sure Mikal Bridges doesn’t have to do everything. Lee is bringing the ball up a fair bit and getting the offense underway, a skill that is harder than you would think considering how high of a basketball IQ that requires. (There’s a reason Crowder was the wing doing this the most last postseason).

In another box checked of doing what the team needs, Lee understands how a little more scoring aggression out of him will help. He’s answered the call. Saturday was his 15th game with at least a dozen points, already surpassing his 13 for the Warriors last year. He scored 16 points.

Without Ayton, Bismack Biyombo continued to certify his true vet card by being ready to step up in a starting role. Biyombo, a mid-season signing by Jones last year, is one of the best shot-blockers to ever wear a Suns jersey. His three versus the Pacers saw him eclipse the 1,000-block mark for his career, making him only the 103rd player in league history to reach that total, per Stathead.

Ever since his Suns debut, Biyombo showed how valuable the veteran know-how of being in the right spot at the right time 99 times out of 100 can be. He served as a safety valve for the Suns’ slashers near the basket, knocking down his patented hook shot a few times to the tune of a season-high 12 points, to go with 16 rebounds and two assists.

Another signing from last season was two-way forward Ish Wainright, who holds that label for the second straight year. Wainright has played sparingly across that time, but whenever he gets a chance, he makes a strong case for more minutes.

His six points, two rebounds, three assists and two steals isn’t as alluring as the other stat lines but he made a few gigantic plays that speak to his growth since arriving in Phoenix.

Williams emphasized how player development has to include “the player committing to the development” and Wainright’s jumper is a shining example of it. Seeing firsthand the progress with his form, release and more has been remarkable in such a short amount of time.

He finds it hard to believe that when he comes into the game, he’s identified as a shooter, and his clutch triple with 1:10 to go in a one-possession game backed up the work.

This is a big time shot by [email protected] has the full support of the fellas. pic.twitter.com/jNVhOXd2aI

And because the opposing bench calls out “shooter” when he’s in the game, Wainright knows that gives him a driving lane. He used that with a terrific pocket pass to Jock Landale at 29 seconds left, once again in a one-possession game, to put the Suns in a dominant position up five.

Lastly, Saben Lee didn’t even need to get into his second 10-day contract before earning enough of Williams’ trust to close out games on Thursday and was out there again on Saturday. Lee’s ability to slash and get to the rim has been a big addition and he’s been very impressive on the defensive end as well.

While he doesn’t have the prettiest jumper, it goes in. Lee hit a pair of 3s. He contributed 12 points, four rebounds and four assists in another good game.

With all that, Bridges had another great night in his elevated role. He added 22 points, four rebounds, four assists and four steals. It’s the first time in his career he’s scored 20-plus in four straight games.

The Pacers got enough of their own solid contributions to win this game. The Suns just got more of them.