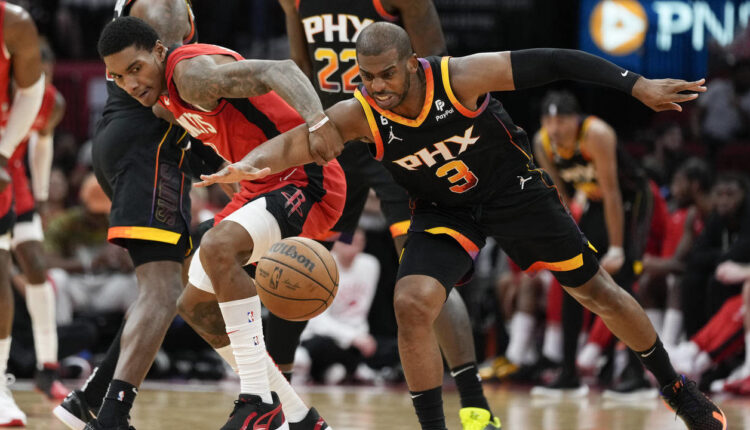 That’s where the Phoenix Suns are at, as they dropped their fifth straight on Tuesday to the Houston Rockets 111-97.

For the third time in five games, it was an awful first half that was the root of it. The Suns trailed by 19 after scoring just 35 points. The energy, let alone any force, wasn’t there again, a necessity when Devin Booker (left hamstring tightness) is absent. They never led and were down 7-0 right away.

This game sets the standard for best examples of how desperately the Suns require another prominent ball-handler and scorer.

Phoenix shot 22% in the first half and not one player was in double figures. When open looks and good shots started not going in, there wasn’t anyone in a Suns jersey that was able to be aggressive offensively to inject some life into the team without looking like they were pressing (outside of Cam Payne). The way Mikal Bridges (1-of-12) and Deandre Ayton (2-for-10) tried to find their footing resembled someone doing one of those spinning log challenges above a body of water.

We know who that other guy is that can stabilize the offense when Booker’s out but Chris Paul just isn’t there yet. He took four shots in the first half and made one.

Paul has to start looking like the guy coming off three straight All-NBA teams. He’s still four games into returning from a 14-game absence but there were concerns with how he played before his right heel injury as well. The team is not built to be a contender with this version of Paul and it never was, as the last two postseason exits have shown.

That’s why he is by far the most important Suns player to watch in the regular season the rest of the way. It’s not close.

Until Paul begins rounding into at least All-Star form or the Suns make a trade that really moves the needle, there’s natural skepticism that materializes when it comes to Phoenix’s chances in April and May.

A bad situation on Tuesday got even worse when both Ayton (left ankle) and Payne (right foot) were ruled out at halftime due to injuries sustained in the game. When taking into consideration the quality of basketball the Suns are playing right now, they cannot afford to lose anyone else important right now.

They are already without Booker and Cam Johnson (meniscus tear) and Suns fans continue to twiddle their thumbs waiting for a Jae Crowder trade, with the crushing weight to the roster construction of a top-six player in the rotation yielding nothing catching up to them by the day.

The Suns (16-12) are in a Western Conference oozing with parity 30 games in. They are one game in the standings away from the play-in and less than three from missing the dance altogether. The latter won’t happen but the timing for a necessary journey of rediscovery in mid-December is bad.

The lone bright spot to take away from the game was Josh Okogie, who is also the only Phoenix player seemingly immune to what is ailing the team. His sheer fight on the defensive end at least made the Rockets earn the win.

Phoenix got the deficit that grew to 23 down to as little as 11, thanks largely to Okogie. He finished with 10 points, six rebounds, three assists, a steal and two blocks.

Bridges ended the game 4-for-24 from the field with a team-high 18 points. It was his worst game as a Sun. For the mojo being off to put a player as steady as Bridges in the spin cycle tells you how deep this team currently is in its hole.

The Suns were outrebounded 67-44 and emphatically lost the game despite finishing with 33 field goals, just one less than the Rockets’ 34. The difference, once again in this matchup, was Houston going 31-for-34 at the foul line compared to Phoenix’s 18-of-19. The Rockets’ 22 turnovers helped the Suns stay in it.