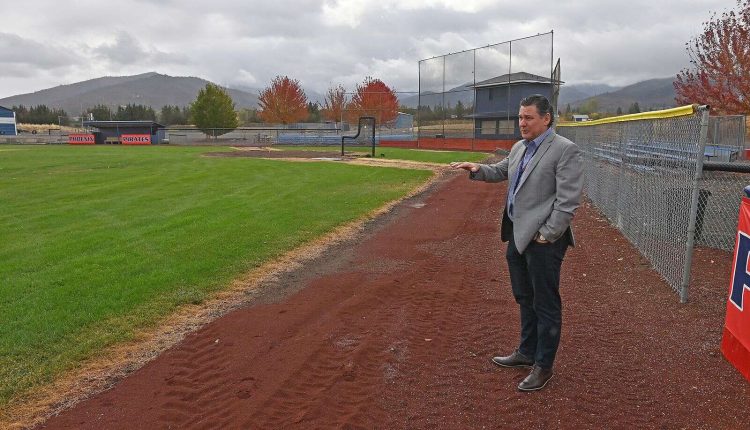 Phoenix-Talent schools superintendent Brent Barry shows a 43-acre property on Colver Road the school district would like to see included in the urban growth boundary. The district sees many recreational uses for the land, including Talent Little League, gardens for the Talent Outdoor School and after-school activities for the Boys and Girls Clubs of the Rogue Valley. [Jamie Lusch / Mail Tribune]

Spaces for after-school activities, an outdoor program and more sports fields are included in the conceptual plan for further development of a 43-acre site on Colver Road near Talent owned by Phoenix-Talent School District.

“We heard a lot of support when we were doing some of the initial meetings in Talent. It’s a really good opportunity to build that, to have a space where kids and the community can enjoy recreation,” said Brent Barry, district superintendent. “We have a tremendous need for after-school care for families, and our space is limited.”

The land needs to be brought into Talent’s Urban Growth Boundary before development can occur. A joint evidentiary hearing before the Jackson County and city of Talent planning commissions is tentatively set for January, the next step in the process. The school district initially applied for the UGB amendment, which would bring the urban reserve area into the city, in spring 2021.

Boys & Girls Clubs of the Rogue Valley, which runs an after-school program at Talent Elementary School, is interested in partnering with the district on developing a future clubhouse at the site.

Phoenix Talent Little League is another potential partner as it looks to move when a lease with the city of Talent for the field at Chuck Roberts Park expires in 2025. Relocation of Talent Elementary Outdoor School to the site also is foreseen, said Barry. Relocation would allow the school to have gardens for students.

A conceptual plan was prepared for submission with the UGB amendment process, but outlines only preliminary ideas, said Barry. Once the UGB amendment is complete, the district would hold meetings with stakeholders and the community before developing detailed plans needed for construction.

The conceptual plan shows potential improvements, including three new Little League fields, a new softball field, tennis and pickleball courts, parking and roadways. Two new buildings are shown in the plan. They include a future after-school and experimental education facility that could be used by the outdoor program and Boys & Girls Clubs. A larger, multipurpose recreation building would allow for a variety of uses, including indoor athletic practices when smoke or weather would preclude outdoor exposure.

The Boys & Girls Clubs has been looking for a site to build a clubhouse for years in Talent, said Executive Director Greg Roe. The club currently runs after-school activities for about 150 kids at Talent Elementary School, with participants also coming from Phoenix and Orchard Hill elementary schools.

Purchase of the land for a building would be desirable, said Roe, but arrangements will need to be worked out with the school district once approval is given for development at the site. He said provisions could be made to accommodate the outdoor program, which runs during school hours.

“This has been a dream for 15 to 20 years. We’ve really gotten closer to the district over the last couple of years,” said Roe. The club assisted with distance learning during COVID shutdowns and raised over $130,000 to distribute to families of kids and employees impacted by the Almeda Fire.

With their own clubhouse, the club hopes to establish a computer lab, an art room, a gym, a STEM room and kitchen facilities in a 15,000- to 20,000-square-foot building. The facility also could be available for use by other groups, said Roe. Fundraising for a clubhouse would begin after approval is given and agreements are reached with the district.

Little League officials hope to move their activities closer to where the high school team practices and plays, said Erin Parent, a former president and liaison for the field transition effort.

“We’d love to be able to have this facility closer to the high school fields and hopefully create a closer relationship with the high school kids being able to interact with the Little Leaguers,” said Parent. Once approval was given and an agreement reached, Little League would begin fundraising to construct the fields. They hope to secure grants.

Some funding is available for outdoor education spaces, said Barry. The district would look at selling surplus property to finance other improvements at the site while working with partners to develop funding for their efforts. Agreements would be created on facility use and maintenance.

Currently there are two baseball fields, two multiuse fields that see a lot of soccer activity and one softball field. The district would like to put in artificial turf surfaces, which hold up much better than natural grass, said Barry.

District school bus operations are located at the site and would be upgraded to meet future needs. Agricultural facilities at the site used by Future Farmers of America students would also be improved.

The joint planning commission session could lead to recommendations on the UGB amendment going before the Jackson County Board of Commissioners and Talent City Council for approval, said Kristen Maze, Talent community development director.

Talent officials had considered including another addition for urban expansion to the request, but have since dropped that idea. The action would have bought another urban reserve into the city so Wagner Creek Road could be extended between the Colver site and the middle and elementary schools. At this time, the city does not have designated funds to purchase rights of way needed for the road, Maze said.