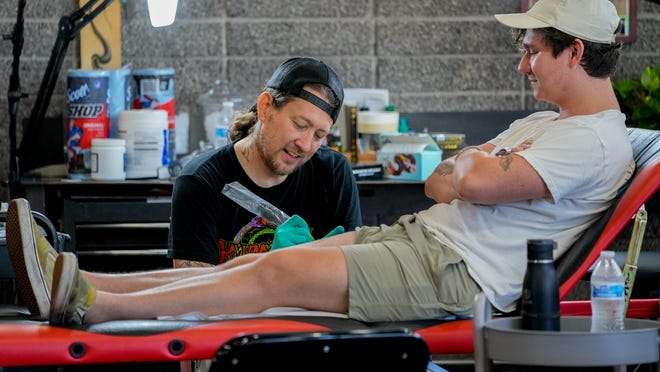 Jason Anthony believes in using his talent for advocacy.

The Phoenix-based tattoo parlor that he co-owns, Golden Rule Tattoo, took part in a nationwide “My Body, My Choice” flash tattoo event in conjunction with the National Network of Abortion Funds on Sunday in order to raise money for local charities that support reproductive rights.

Flash tattoo events offer pre-made tattoos at a discounted price on a first-come-first-serve basis. Clients could choose from traditional designs you might expect to see at a tattoo shop, like flowers and butterflies. Golden Rule Tattoo also offered designs made specifically for the event, like gravestones for “the patriarchy” and floral uteruses.

“It’s starting off really hot,” said Anthony. “It’s real busy, right off the bat, and we knew it would be. When we first opened, I think there were 60 people waiting and they just keep coming.”

So that customers did not have to wait in the Arizona heat for their tattoos, Anthony provided heat relief under an awning at the back of the shop where cool misters blanketed waiting guests. A ticket number system was also put in place so people could escape the heat.

Volunteers with Arizonans for Reproductive Rights were also present at the event, providing bottled water, snacks and a place for people to register to vote.

‘We are demanding our freedom’:Arizona women share their abortion stories at Planned Parenthood event

“We’re raising money for reproductive rights,” said Anthony. “Every artist working today is volunteering their time and their tattoos. So the artists are only taking tips home.”

According to the My Body, My Choice website, more than 150 tattoo studios across the United States participated in Sundays tattoo flash event.

Golden Rule Tattoo has been promoting the event for nearly a month on their social media accounts and expected a large turnout considering “what it’s for and how furious everyone is,” said Anthony.

Bree Lin, a valley tattoo artist, volunteered her time on Saturday to tattoo customers. While she has been a tattoo artist for nearly seven years, Lin completed an apprenticeship at Golden Rule Tattoo and now has her own private studio.

“… There is a lot of harm that is going to be happening to some of the most vulnerable people because of it, so why not volunteer,” said Lin. “I’ve been relatively active in stuff like this since I was a teenager.”

Brittaney Simonton arrived at the tattoo parlor around 9 am to stand in line before the shop opened. While getting her tattoo done by Lin, Simonton opened up about her feelings regarding the event and its purpose.

“So I actually struggled with infertility, so it’s a little bit of a different take on everything,” said Simonton. “I feel like every woman should have a right to choose. I feel like treating women like incubators is so f—-d up.”

Simonton said that she chose to go with a hand-held “love yourself” note as a tattoo because she feels like it’s a good daily reminder that “you’re not alone and whatever state you’re in right now, it’s ok to be in that state, it’s ok to feel your feelings.”

In 2021, Golden Rule Tattoo held a similar event that raised over $11,000 to support victims of domestic violence and women’s shelters, according to Anthony.