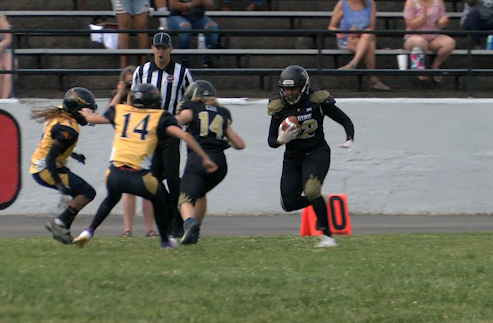 ELIZABETHTON, Tenn. (WJHL) – A pair of 3-1 teams met on the gridiron in Elizabethton on Saturday night, as the East Tennessee Valkyrie hosted the Carolina Phoenix at TA Dugger Middle School.

The visitors jumped out to a quick 24-0 lead, but the Valkyrie would respond in the second quarter. After a lengthy drive down the field, Jamie McKay scrambled in for a touchdown, cutting the lead to 24-6.

However, on the ensuing Phoenix possession, Katelyn Krug launched a jump ball for Jocelyn Morrison, who came down with the catch and raced into the endzone.

The Phoenix would close out the game, 36-6, improving to 4-1 on the Women’s Football Alliance season. The Valkyrie drop to 3-2 on the year.

East Tennessee (3-2) has one regular season game remaining against the Music City Mizfits. That game will be played next Saturday, May 21.