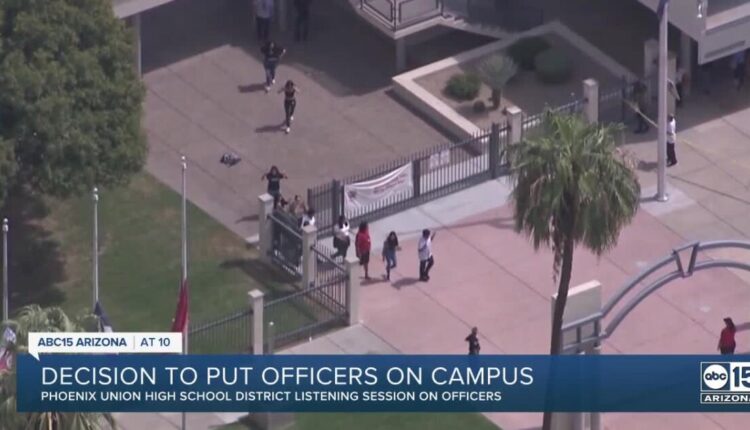 In all, fewer than 75 people showed up to share their opinions.

“I’ve had just a week of experience in this district, and it’s been a concern in terms of safety at the school where my 16-year-old is attending,” said Maria Fant.

Parents, like Fant, were who the governing board wanted to hear from. But, school leaders also want to know about safety concerns from students, staff and the community.

Pinner admits she’s worried after all the lockdowns on district campuses.

She’s not, however, ready to say whether police officers should be back on campus after they were removed in 2020.

“I think school safety is a big concern all across the country and Phoenix Union is doing the best it can to bring all of the voices to the table,” added Pinner.

Third-party facilitators, for the governing board, assigned attendees to several rooms allowing them to speak openly, honestly, and confidentially.

One woman in attendance did not say whether she wanted security on campus, although she offered a different solution.

“I think if we train up young people to be leaders and role models, in their school and community, that is going to help to deal with some of the issues you have with safety,” said Pamela Neal.

Fant believes bringing officers back on campus is the right move.

“I think it would make the students feel safe as well as the teachers and the staff. The administrators[would[feelsafer…iftheyhadsomeonewhocouldbeherequicklyifthereisanemergencysituationorfightthatbreakoutifitismorethantheycanhandle”addedFant[would[feelsafer…iftheyhadsomeonewhocouldbeherequicklyifthereisanemergencysituationorfightthatbreakoutifitismorethantheycanhandle”addedFant

Two more community meetings are scheduled for each January and February.

A spokesperson for the Phoenix Union High School District shared a statement with ABC15:

“The Phoenix Union High School District (PXU) encourages staff, students, families, and the broader community to participate in the Governing Board Student Safety Committee listening sessions. We must come together, share our thoughts, and engage in an honest conversation about school safety. The committee is a recommending body tasked with reviewing and developing proposals, including law enforcement roles and administrative protocols for mandatory reporting. The upcoming listening sessions will provide critical feedback for the committee to utilize as they create policing models for PXU’s Governing Board to consider. School safety is everyone’s responsibility, and we will continue to work collaboratively with our staff, students, families, and the broader community to ensure that our campuses continue to be safe places to work and learn.”