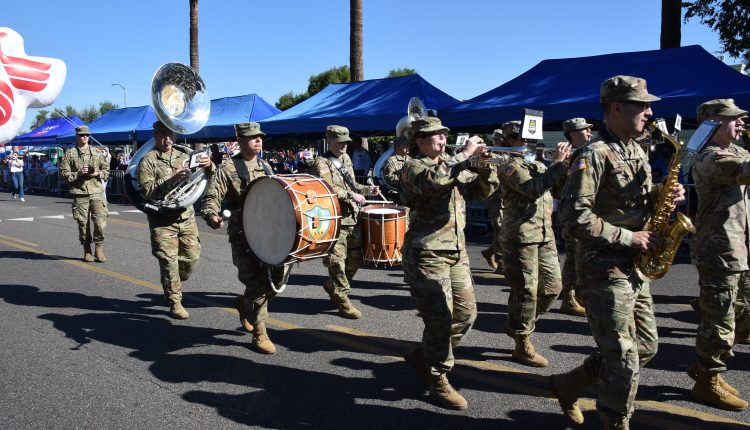 Event organizers estimate an attendance of more than 45,000 people at this year’s Phoenix Veterans Day Parade, scheduled to begin at 11 am on Friday, Nov. 11.

This year’s parade grand marshals continue honoring veterans from every foreign war or conflict from World War II through Afghanistan, a press release explained. The parade is presented by the nonprofit Honoring America’s Veterans.

Spectators can watch anywhere along the route. The parade begins at Montebello Street and Central Avenue, crosses east on Camelback, and turns south on 7th Street.

For the first time in the 2022 Phoenix Veterans Day Parade, spectators will see a brand-new eagle balloon with a wingspan of 25 feet which takes 35 cubic meters of helium to fill, the release stated. A dozen volunteers will handle it on the parade route.

“The best places to watch – with the most convenient parking area is on Camelback Road and 7th Street,” Paula Pedene, parade coordinator, said in the release. “This parade deeply touches the lives of our veterans as we remember and thank them for their sacrifice and protection of our freedom. The veterans tell us every year the healing they receive from the parade touches them differently than traditional therapies do. We never knew a thank you from us to them could mean so much. It truly is a healing event.”

The 2022 Phoenix Veterans Day Parade Grand Marshals in the Honor Our Heroes Program include:

Honoring America’s Veterans added two levels of distinction to this year’s parade with a Business Community Grand Marshal entry. U-Haul, a 20-year parade sponsor, will pay tribute to Hap Carty, a WWII veteran and the first employee at U-Haul.

The other honor goes to David Carrasco, a Vietnam veteran, who will serve as the Veterans Community Grand Marshal. Carrasco founded the Prisoner of War, Killed in Action and Missing in Action Honor Guard to ensure veterans and their support groups receive military honors at their events, activities and memorial services.