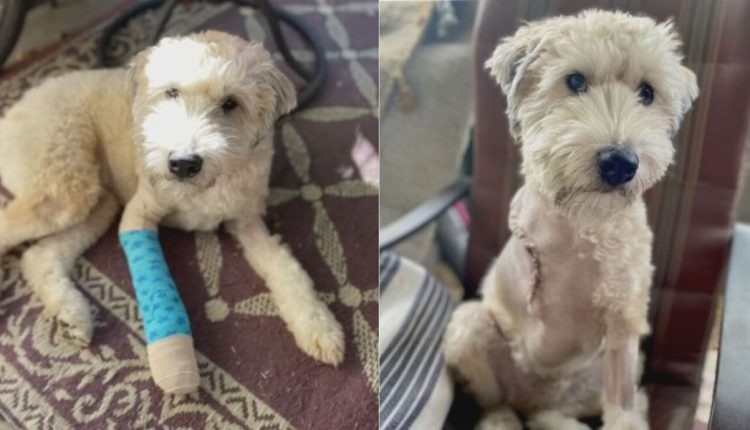 PHOENIX (3TV/CBS 5) – A Phoenix woman says two pit bulls charged at her and her two-year-old wheaten terrier, Stanley leaving her dog so severely injured that his leg had to be amputated.

A routine walk for Heather Isgrigg and Stanley in their Phoenix neighborhood near 19th Street and Campbell Avenue turned to terror within seconds. Across the street from them were two pit bulls. Isgrigg says the pit bull’s owner bent down to pick something up when the dogs took off.

“As soon as she lost control of the dog, she started screaming and I knew it was going to be bad,” Isgrigg said. “It was pure terror and then it was just two pit bulls coming right at us. I froze and didn’t know what to do.” One of the pit bulls immediately latched onto Stanley’s arm, ripping it to its bone. Isgrigg says she tried pulling the dogs apart with their owner for 20 minutes. “We were stuck for what felt like eternity,” she said.

Finally, two strangers stepped in. One of the strangers handed Isgrigg a skateboard, and the other gave her mace. That was the only thing that got the dog to let go of Stanley. “It looked like the whole top of his foot was gone. Everything was bloody.”

Isgrigg says the worst part is that the dog’s owner ran away and still has not come forward. “During the altercations she was screaming that she was sorry so I really believed that she would do the right thing.” Isgrigg rushed Stanley to the veterinarian, where doctors gave her two options: try to repair the leg with months of daily bandage changes or amputation, which they agreed would be better long-term. Stanley now only has three legs.

Isgrigg says Stanley is hanging in there, but what happened now makes her scared to walk in her neighborhood. “I don’t think I’m going to walk Stanley for a really long time, and I think he’s going to be pretty traumatized,” she said. Isgrigg says she’s looking into getting Stanley a prosthetic leg.

Maricopa County Animal Control says they are working on this case and asking anyone with information on the dogs or their owner to please call 602-506-7387.

A GoFundMe page has been created to help with Stanley’s recovery click here to donate.

If You’re Worried About the Environment, Consider Being Composted When You Die