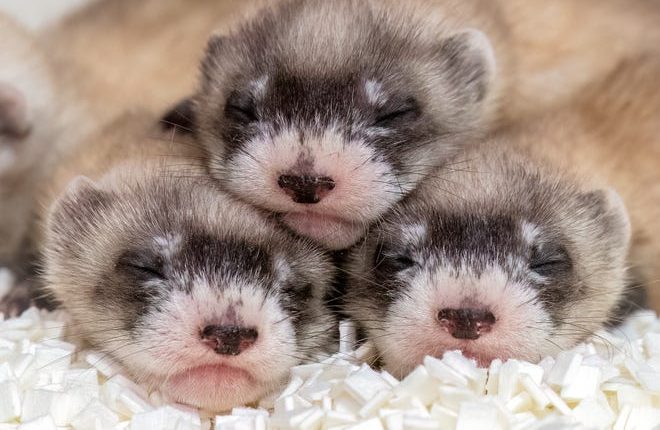 The Arizona Center for Nature Conservation/Phoenix Zoo welcomed five more litters of the highly-endangered black-footed ferrets this May and June at its Elaine V. Johnson Conservation Center.

There are 21 baby ferrets, or kits, in all born to mothers Akoya, Roseanne, Vermillion, Lady Mary and Canneles, and some will be identified as candidates to be released into the wild.

According to Tara Harris, the director of conservation and science for the Phoenix Zoo who oversees its breeding and recovery programs, there are only a few hundred of the animals living in the wild today.

Black-footed ferrets are one of the most endangered animals in North America and were actually thought to be extinct, though they were rediscovered in 1981 in Wyoming, according to the Black-footed Ferret Connection. They are one of only three species of ferret in the world and the only species native to North America. The Black-footed Ferret Connection’s website says they were originally native to 12 US states, living in areas of short or mixed grass, but they are now only found at reintroduction sites.

When they were rediscovered, biologists captured the remaining ferrets they could find and began breeding them, and all black-footed ferrets are likely descended from just seven ancestors as a result, according to Harris.

The Phoenix Zoo is one of six facilities in the world breeding the ferrets for reintroduction into the wild in an effort to save the species from extinction. It has been breeding ferrets since 1992 and has produced over 500 ferrets total in those 30 years, Harris said.

Beating the heat:How animals at the Phoenix Zoo stay cool in the summer

Just last year, 13 ferrets bred at the Phoenix Zoo were released into the wild in Colorado, according to a press release from the Phoenix Zoo. There are also reintroduction sites in Arizona and a total of 30 sites across the country, Harris said.

Later in August or September, Harris said they will begin identifying which kits would make good release candidates. Those kits will then go to a facility in Colorado for pre-conditioning.

“You can kind of think of it like a boot camp for black-footed ferrets where they go and they have to learn all the survival skills that they need to live out in the wild,” Harris said.

The conditioning includes living outdoors in underground burrow systems, where they get the chance to hunt on their own, Harris said. If they complete the tasks necessary to survive in the wild, they will be released.

For now, the ferrets will remain with their mothers at the Johnson Conservation Center, and in the meantime, the zoo is asking the public’s help in naming one litter of ferrets born to mom Canneles and dad Juniper. According to the press release, there are four kits to be named, and four themes to choose from.

To vote for a name theme, visit the zoo’s website. Voting is open now until Aug. 16, and the winning names will be announced Aug. 19, according to the press release.

After ‘a Lot of Doors Shut in Our Face,’ Crusading Couple Celebrate Passage of Burn Pit Bill