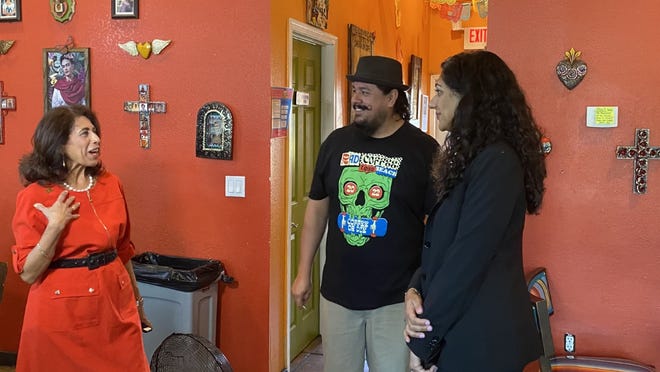 José “ET” Rivera spent his rent money on a coffee cart and went into business for himself eight years ago. After purchasing the coffee cart, Rivera only had $200 left. Now, he and his partner Magaly Martinez Saenz now own and operate two Mexican coffee shops called Tres Leches Café.

The shops are located in central and south Phoenix and continued to operate through the COVID-19 pandemic and light rail construction.

A third location will open soon in the beginning of December, Rivera said, at 53 W. Thomas Road, Suite A.

Tres Leches also has something for those who aren’t coffee lovers, like real fruit smoothies or Mexican hot chocolate. Rivera hopes to soon add more breakfast options, like breakfast burritos that can also be purchased from a grab-and-go hot food bar.

Crawford enjoys the Tres Mexicanos latte, which has Mexican hot chocolate, espresso and cream. Uribe’s favorite drink is the Aztecas hot chocolate, which is a Mexican mocha.

They’ve also found support during the pandemic from federal programs to help keep businesses afloat. Martinez Saenz said it took scouring the internet for resources and getting connected to the Small Business Administration.

Martinez Saenz said while it was a complicated process, she was also surprised by the support she found. “Coming from a minority community, it’s not almost normal for us to get that much help and attention right away, historically speaking,” she said.

Rivera was among Hispanic small-business owners who recently met with Vice President Kamala Harris. Rivera’s business was recommended for the meeting by the SBA, and he received a formal invitation in his email.

Rivera said the meeting took place at the Observatory Circle in Washington, DC, with a group of other small-business owners. Harris gave a speech where she congratulated the business owners for making it through the pandemic.

Martinez Saenz and several of their children also visited Washington and explored the city while Rivera met with Harris and the other business owners.

It hasn’t been easy

Rivera first purchased a coffee cart in 2014 on Craigslist. The person was selling the coffee cart, which is still sitting in the central Phoenix location, for $4,000. Rivera offered him all he could afford, which was $2,000. Upon explaining his passion for making coffee, the seller agreed.

After finding success selling coffee in his front yard, Rivera’s friend let him move the coffee cart to his deli, Scott’s Generations. The Phoenix New Times caught wind of the business and from there, Rivera said he had a long line almost constantly.

The couple opened their first location at a house their friend was leasing in the fall of 2016 before opening their current location, at 1714 W. Van Buren St. in central Phoenix, about two years later. They expanded their menu to also include pan. Later, they embarked on another shop at 5602 S. Central Ave. in south Phoenix. Unfortunately, the south Phoenix shop opened one month before the government-mandated shutdown in 2020.

They temporarily shuttered the central Phoenix location but were able to keep the south Phoenix café operating as a drive-thru.

“We were really shocked by how much support we got from the community,” said Martinez Saenz, adding that sales almost made it feel as though they hadn’t shut down at all.

Martinez Saenz also turned online to a Reddit community for small businesses and discovered resources that were available. She emailed the office of Sen. Mark Kelly, D-Ariz., and to her surprise, heard back right away. She was soon connected with an SBA agent, who connected them to a pandemic-related Paycheck Protection Program grant for $50,000 and a loan to help through the economic hard times.

Without the SBA, she said, Tres Leches wouldn’t have made it through the pandemic. Tres Leches struggled with staffing, with many employees deciding they weren’t ready to return to the workforce, said Martinez Saenz. The café also had to shut down frequently whenever an employee contracted COVID-19.

Because of the limited number of employees, no one could open on their own, Rivera said. Even Rivera’s daughter and sister decided that they could no longer work at the café due to staffing struggles.

After the mother of several of Rivera’s children passed away in 2020 during one of the cafe’s closures, Rivera said he was at a point where he did not want to even reopen. But Martinez Saenz reminded him that they had debt and also wanted to work toward their goal of purchasing a house together.

“It was almost like I was getting ready to go bungee jumping,” Rivera said of reopening the café, and feeling as though he essentially had to start over.

The light rail is expected to open in 2024. The south Phoenix location continues to struggle with business due to construction and has gotten little help from the city. Rivera said he’s mostly been in contact with Valley Metro, which has offered the business banners and signs stating that they are open.

Rivera said he also declined to apply for a grant from Valley Metro, as it was not enough money to make an overall difference, he said.

Continuing to find a way

Both cafes are now reopened and the financial situation has improved, although they continue to manage through staffing shortages and inflation. Tres Leches Café didn’t hit financial struggles until the latter part of 2020.

In the beginning of the pandemic, Rivera said the locations were thriving, which is when they decided they would open a third location, which will be located between Third Avenue and Central Avenue in midtown.

Rivera said this new location will have an expanded bakery since the kitchen is much larger than the one located on Van Buren. He also hopes to soon expand the menu to include breakfast and expects to open by early December at the latest.

Congress knows how to slash child poverty. It just needs to do it.