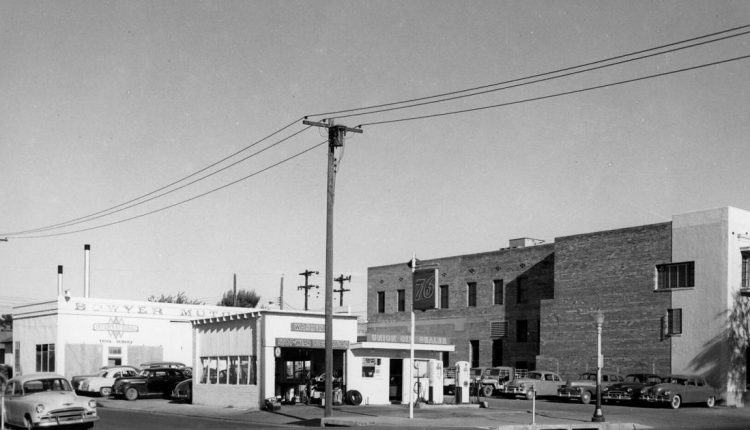 The Arizona Daily Star and Tucson Citizen signed a groundbreaking joint operating agreement in 1940 to ensure the viability of both newspapers. They left their separate downtown locations and moved to a new building at 208 N. Stone Ave. Traffic boomed in the early 1950s as Tucson swelled and families settled after World War II. In 1940 931 tons of newsprint were used. In 1953 it was 4,350 tons.

The company acquired adjacent property for an expansion. Tucson icon MM Sundt Construction was commissioned to complete the project. The building added 50,000 square feet of additional floor space, allowing for separate newsrooms and space for advertising and business offices. The extension doubled the size of the existing building.

To meet demand, a new 4-story Goss headliner press was installed. The print capacity has been increased from a 48-page to a 64-page edition with an output of more than 24,000 copies per hour. Three large windows in Miltenbergstrasse gave an insight into the printing operation. Miltenberg became part of Ratsstrasse in 1960. Since then it has disappeared due to renovations.

Although the building was extremely solid and useful, it was demolished when TNI again relocated to a huge campus on a railroad track at 4850 S. Park Ave. By 2019, printing was outsourced to the Arizona Republic in Phoenix. Park Ave. was sold in 2020.

Swiss Re sells 6.6% of the shares in Phoenix Group

No. 6: Tucson wins consecutive state titles, beating Westwood in 1966 with a…