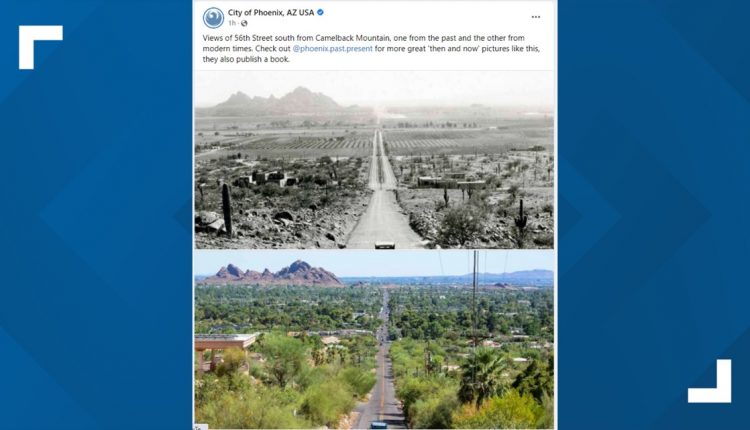 Photos show changes in the Phoenix landscape over the decades

Images from Camelback Mountain show how much has changed in the Phoenix area over the past few decades.

PHOENIX — Who doesn’t like going back and looking at old photos? They give us a chance to remember things we may have long forgotten and to recall our dearest memories.

Whether it’s family photos or home videos, capturing these glimpses of the past is always a special moment. Just ask the City of Phoenix Facebook page.

A recent post shared two photos from the Phoenix area showing a view of 56th Street south of Camelback Mountain. One photo was taken years ago in black and white, the other is more recent and in colour.

When you see these views side by side you can really see how much everything has evolved in the time these photos were taken.

RELATED: Did you know that Phoenix bellhops used to compete downtown?

Views of 56th Street south from Camelback Mountain, one historical and the other modern. Check out @phoenix.past.present for more great then and now images like this one, they are also publishing a book.

RELATED: Oh how Phoenix has grown: Brophy College Prep used to be in the country

How big is Maricopa County?

Maricopa County is the 4thth largest county by population with 4,485,414 inhabitants, according to the 2020 census.

The county contains approximately 63% of Arizona’s population and is 9,224 square miles in size. This makes the county larger than seven US states (Rhode Island, Delaware, Connecticut, Hawaii, New Jersey, Massachusetts and New Hampshire).

One of the largest park systems in the country is also located in Maricopa County. The county has an estimated 300,000 acres of open space parks that include hundreds of miles of trails, nature centers and campgrounds.

The county seat is in Phoenix, which is also the state capital and ranked 5th on the censusth most populous city in the United States.

The county was named for the Maricopa or Piipaash Native American tribe.