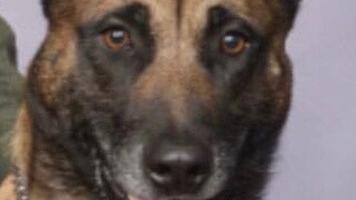 The Pima County Sheriff’s Department is transferring a K-9 to Yuma police after it bit its handler and officials determined the department’s training methods will not be able to solve the dog’s problem.

The Belgian Malinois named Messi was being trained to be an all-purpose law enforcement dog for the department, but Messi and the handler he was matched with didn’t get along, Sheriff Chris Nanos said. Although Messi was smart and capable, Nanos said it reacted in negative ways with the handler, biting him on at least two different occasions.

Dogs like Messi are bred to be police dogs and are purchased from across the country, Nanos said. A trainer spends time training them to get them to a level where they can take the next step. The sheriff’s department then gets possession of the dog and matches it to a handler who takes over training responsibilities.

“To shift him from that handler to one of the other handlers is asking for a lot of trouble,” Nanos said. We can’t just give them a dog somebody else had, we have to give them a new dog that matches them, their personality and their ability to work the dog.”

Since Messi can’t go to another handler and releasing him to someone in the community is too much of a liability, the next best option is to find another agency that wants to take him on. Nanos said K9 transfers like this “happen from time to time.”

“We thought the best thing for this dog is to give him to another agency that wants to take him on and see what they can do with them,” Nanos said. “Our options are very limited, and it usually leads to euthanasia. We do not ever want to have to do that to these fine dogs. That is not an option.”

Nanos said the department let other agencies know it had a K-9 that wasn’t working out. The Yuma Police Department, which was aware of the issues the handler and Messi faced, volunteered to attempt to rehabilitate Messi.

At the Aug. 2 Board of Supervisors meeting, the donation was discussed and a sheriff’s department official told supervisors that Yuma police utilizes different training techniques and that it is confident the department can train the behaviors out of Messi.

Though skeptical at first, the supervisors approved the transfer to Yuma, hoping Messi gets a second chance there.

“We value these dogs more than just police animals,” Nanos said. “They are precious animals to us. They’re part of our family too.”

The sheriff’s department will be purchasing two new K-9s, one to replace Messi and another one for the Ajo station.

The $25 million grant will help expand the bridge from four to six lanes, feature a divided median and a separate bicycle and pedestrian bridge.

The bear was last seen on Thursday morning heading north at Linda Vista Trail. Officials hope to tranquilize and relocate the animal.

Clear My Warrant, which launched this month, is a no-court, no-jail program that will allow people the ability to clear their felony probation warrant without being arrested or incarcerated.