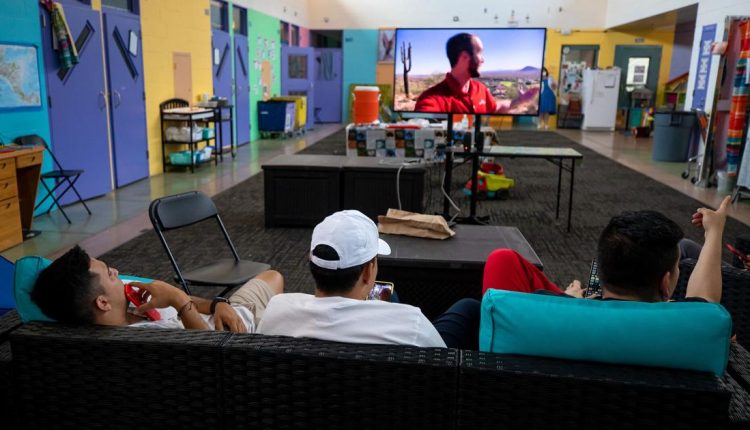 The federal government will be giving Pima County more than $23 million to cover services to migrants seeking asylum who come through the county and Tucson.

From that $23 million, the county has calculated that the first $3.2 million, awarded through FEMA’s Emergency Food and Shelter Program, will reimburse services Pima County has already provided for migrants seeking asylum through this last June, according to a recent memo from County Administrator Jan Lesher.

The county anticipates the additional funding, a commitment of nearly $15.6 million from the national board that overseas humanitarian aid through the federal program, as well as another $4.4 million for COVID-related services for asylum seekers, will cover the county’s services through the end of the year

Migrants who recently crossed the US-Mexico border and aren’t sent directly back to Mexico under public health policy Title 42 often hope to seek asylum in the US and are sent to a nonprofit such as Casa Alitas Welcome Center in Tucson, which provides them with short-term basic services and transportation to their sponsors all over the United States.

From April 2021 through this July the county has spent more than $10.4 million on services to asylum seekers that is being either covered or reimbursed by FEMA’s Emergency Food and Shelter Program, a federal program funding organizations across the country that are assisting migrants.

FEMA awarded $110 million to the program in March of 2021 for humanitarian assistance to migrants and another $150 million this year.

Casa Alitas is part of the county’s Southwest Border Initiative, which provides services that include short-term food and shelter, medical services, longer-term hotel stays in cases where people have COVID and need to quarantine, and travel to their final destination, which is usually out of state.

With the new funding the center can continue to expand its daily intake and overnight shelter capacity as well as hire enough staff to support its work, says Teresa Cavendish, director of operations for Catholic Community Services, which runs Casa Alitas.

“Right now we are being challenged to accept about 300 people a day, and those numbers are unlikely to decrease and more likely to increase,” she said.

In February the center was seeing an average of 140 people a day.

The county is currently spending between $1.2 million and $1.6 a month, depending on the volumes of asylum seekers. Its officials expect the volume to increase and based the funding estimates on receiving up to 450 individuals a day through the end of the calendar year.

As mass migration continues throughout the Western Hemisphere, the number of Border Patrol encounters with migrants at the US-Mexico border continues at high levels, breaking records for a few months this year.

In July, there were nearly 239,000 encounters nationwide, some that were repeat encounters with the same person. In about 33% of those encounters, the migrants were sent directly back to Mexico under Title 42, and the other 67% of the time they were processed under US immigration law, which grants people an opportunity to make an asylum claim when they go to immigration court.

Officials and organizations that provide services to nonprofits have been expecting an increase in migrants who need services when Title 42 ends. The public health policy was put in place in March of 2020 because of COVID. The Biden administration sought to end it in May, but it was kept in place for now by a federal court.

Since it was enacted, almost half of Border Patrol apprehensions have resulted in an immediate expulsion back to Mexico or other countries.

“We are the hub for our neighboring counties as well, and we want to make sure that people who are coming, who are seeking asylum and in Pima County, get the services that they need and make sure that if they have COVID or some other issues, that we’re also protecting the health of our community,” she said.

The funding that is committed to the county will be distributed in portions, with the first portion now being processed. The new money brings the federal funding committed to Pima County’s asylum-seeker services to nearly $34.9 million since April 2021.

While the new funding is going to allow the county and Casa Alitas to continue to provide increasing levels of food, clothes, shelter, travel expenses, medical services and more, it is still short-term funding, Cavendish says.

“Even though it’s a lot of money, it goes rather rapidly and is only guaranteed for a certain period of time, where the situations we are trying to address with the migrants are going to extend beyond that period of time,” she said. “So we do certainly feel a sense of relief that we will have the support that is necessary in this county and in this region to continue our work at the scale that we need to for the next several months.”

Currently about helped the people coming through Casa Alitas for services are in a family unit, with many coming from Venezuela, Cuba, Brazil, Haiti, Columbia and the Northern Triangle region of El Salvador, Guatemala and Honduras, Cavendish says. Some of the migrants seeking asylum are coming from as far as Russia and India.

“We’re continuing to see folks who are coming from regions of the world that have been completely destabilized, and they’re just simply unable to sustain their lives there,” she said.