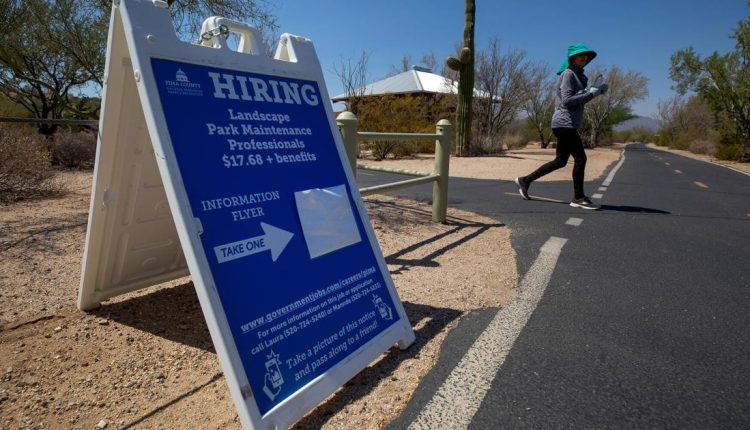 Pima County and the city of Tucson are approaching the next fiscal year with financially steady budgets, but a continuing struggle to retain and hire employees could hamper the key services the governments provide.

In May, the city reported an overall vacancy rate of about 12%, while the county experienced a 16% rate of unfilled positions, according to data from both jurisdictions.

A variety of factors — from inflation rates not seen since the 1980s, soaring gas prices and insufficient pay — are compounding the ongoing trend of the region’s local governments struggling to maintain a steady employment base.

Both governments are addressing the employment issue amid the laborious task of finalizing budgets for the upcoming fiscal year, which often outlines a compensation plan for employees.

The city’s already adopted a $2 billion budget for fiscal year 2023 that includes giving every city worker a flat-rate $2,013 raise and 3% raises for fire department employees (due to their unique pay structure) at an estimated total cost of about $14.6 million.

While the county’s set a $1.9 billion cap on its budget, it’s delayed the final adoption of next year’s spending plan as the Board of Supervisors has yet to agree on a compensation package, balancing the need to increase current pay while being able to afford a solid employment base over time. The board will make a final compensation decision at its meeting Tuesday, June 21.

“We may have a good fund balance right now. But given everything I’m seeing change in the economy worldwide — supply chain issues and life coming out of COVID — now is not the time to decrease all of our fund balances when we’re going to such a time of uncertainty,” County Administrator Jan Lesher said.

Before the Board of Supervisors was set to hear a compensation proposal, Supervisor Matt Heinz put on the board’s May 17 agenda, dozens of county employees submitted comments asking the board to approve the raises. The proposal included an 8.5% raise for those making $52,000 or less a year, with lower percentage increases for those earning more.

One employee wrote: “as a single parent that works for the county 40 hours a week (not remote), this has been the most challenging time in my entire working career.” Another comment read: “We, all of Pima County, are suffering and this would help us to be able to put food on our tables and pay our bills.”

Carolina Gray, a paralegal at the Public Defender’s Office, was one of the dozens who wrote to the board. As a single mother, she lives with her three kids at her parents’ house but is struggling to find her own residence in Tucson’s volatile housing market and with a $21.40 hourly pay rate.

“I either pay for a vehicle to get me to work or buy a house. It’s either one, I cannot be paying both,” she said. “I love my job. I love helping the people, the clients. The economic situation is what makes it hard.”

Supervisors and county administration have submitted eight different formulas outlaying cost of living adjustments for further financial analysis. The board couldn’t agree on a single package at its June 7 meeting, delaying final budget adoption to July 5.

It’s the option that costs the least amount above Lesher’s original compensation plan which would cost about $18.5 million. The new proposed raises would go $690,225 beyond the tentative budget, which will require cuts elsewhere, but Lesher said “we can find that without doing irreparable harm to some of the departments.”

Grijalva said she sympathizes with the financial constraints county employees are facing, but implementing an exhaustive pay increase could cause more harm down the line.

“The increases are hitting everybody, and I wish we could do more … But I also don’t want to say to these employees, ‘Here you go, we’re gonna go super aggressive, and we’re going to exhaust every carry forward (fund) we have,’ and then next year, or the year after that, we’ll have to cut jobs.”

Each of the proposed raises assumes about $5 million worth of vacancy savings, or money saved by not filling a position, to go toward funding them.

The county’s department heads have expressed the need for more staffing to complete the core tasks they carry out. Saving money by leaving positions unfilled is often a last-minute effort to balance a budget, but it can compound staffing issues local jurisdictions already face.

“Some of our departments that have been running at 25-30% vacancy for a year, you may have a position or two to give up … just because a position has always existed doesn’t mean it will exist in perpetuity,” Lesher said of cutting positions to free up funding. “What we don’t want to do is get in a position where you may be earning more, but you’re now doing the job of two. That’s not appropriate either.”

The impact of low staffing

Last year, Tucson implemented the largest compensation package for employees in the city’s history, spending around $30 million to bring employees’ salaries up to market rates, or to make compensation comparable to what similar positions around the state.

Vacancy savings were used to fund the raises, Ortega said, “because even with the modeling that we prepared, it was clear that we would not be able to fill all of the vacancies that we had on the books.”

But similar to Pima County, recruitment and retention remains an ongoing struggle for the city.

When Elsa Quijada, the city’s human resources director, spoke with city council about the annual compensation plan at its May 19 meeting, she expressed how city workers are feeling the impact of vacant positions.

“It was very enlightening for us to speak to our employees and hear those concerns, how burnt out they are, the additional work that they’re picking up because of those vacancies,” Quijada told the board. “We’re going to target specific areas where we can focus on recruiting efforts to really enhance those positions because it is very concerning. It’s impacting life-work balance.”

When the county held its annual budget hearings in mid-May, where each department addressed the board on challenges and accomplishments experienced throughout the year, many department heads expressed the need for more staffing.

Pima County Human Resources Director Cathy Bohland told the board that from April 2021 to March 2022, the county lost 1,533 employees with a 23% turnover rate.

Pima County Recorder Gabriella Cazares-Kelly, whose department had a 28% vacancy rate in May, told the board “challenges in the recording side have been mostly related to staffing” and that “pay is not currently reflective of the demand of the position. ”

Dean Brault, director of Public Defense Services, told the board: “We’ve been dangerously close to not having enough lawyers to be able to have a lawyer for everybody for every case that comes up.”

Both Lesher and Ortega point to national trends like the “great resignation” phenomenon, where mass numbers of employees have left their jobs as priorities shifted throughout the pandemic, and the “silver tsunami,” where an increasing number of workers are reaching retirement age.


“We’re an employer, like everybody else who’s getting hit with the impacts of the great resignation. And it’s hard to hire people,” Lesher said. “I think that these days, I don’t think everyone understands what government does or they don’t necessarily look for careers in public service.”

Ortega said while the city is doing well financially, the national employment trends are taking place outside one local jurisdiction’s control.

“There are factors that are outside of just Tucson, Arizona,” he said. “It’s not just pay, but it’s the supply and demand, if you will, the availability of people to do these fundamental and basic public service type jobs and roles going into the future.”

When it comes to pay, competition with the private sector has been a long-standing issue for local governments that work with limited financial leeway while pay raises are subject to lengthy approval processes. For private sector workers, the year-over-year growth in hourly wages in the past four quarters has exceeded the wages for state and local governments by the largest margin on record, according to an analysis by the Pew Research Center.

“We probably have pockets of employees in different areas of the city and the county … that we are not going to be able to compete with the private sector,” Council member Steve Kozachik said. “That means that those of us who are looking at public sector employees have got to be offering some of the things that are more creative and flexible in the workplace.”

Both the city and county have adopted strategies to recruit workers, such as providing tuition reimbursement programs and more flexible work hours.

And both are taking advantage of a wide array of online recruitment tools, such as Indeed and LinkedIn.

According to Bohland from the county, thorough recruitment efforts have led to 9,945 applications to work for the city from January to April, a 43% increase from the time frame as last year.

Both the county and city are sitting in solid financial places, partly due to hundreds of millions worth of COVID-19 relief dollars funneled through the federal government. But the relief from those one-time disbursements is temporary.

Those dollars won’t show up in future budget cycles, spurring both governments to begin efforts to draw up long-term compensation and benefit plans.

“We’re hearing that our employees, like their counterparts in the private sector, are struggling with the high cost of living … employees, and all workers in this area, are dealing with it,” said Supervisor Rex Scott. “That’s why we’re looking at enhanced parental leave, tuition reimbursement, some of the other things we’re doing to try and be seen as an employer of choice in Southern Arizona. But salary and benefits are always the bottom line for anybody.”

“The rising tide lifts all boats”

Although both jurisdictions are searching for the same pool of candidates for work in the public sector, the city and county are beginning to work together to address the hiring challenge.

Lesher said plans are in the works with other local governments, including Tucson, to create an online portal that will direct applicants to the public sector job best suited for them, regardless of the jurisdiction.

The county administrator said transferring personnel across organizations is another idea. For example, if a promoted position in the city is full, an employee could take the same position in the county.

“The managers of the four largest incorporated jurisdictions and I meet every other week. Part of what we’re talking about is…how do we make sure that we’re not stealing from each other, but that we’re complementing each other?” Lesher said.

Kozachik is also a proponent of cross-jurisdictional collaboration.