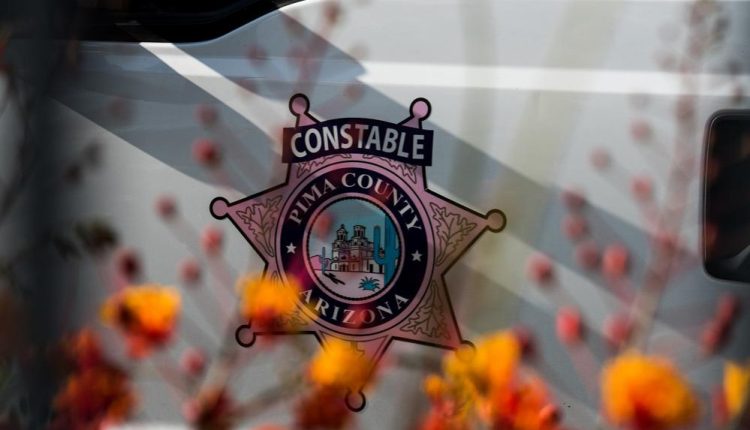 Pima County constables may face an ultimatum from the Board of Supervisors this week: shape up or lose pay.

County Administrator Jan Lesher is asking the board to approve a new “voluntary” set of policies that would evenly distribute workloads, normalize procedures for evictions and dress for the job, develop their own policy guidebook and standardize the service of court papers and days worked.

Constables are elected officials, so the board can’t tell them exactly what to do or how to do it. Supervisors can only strongly recommend policy changes. However, they can change the constables’ pay.

All the constables now on the job are paid $67,000 a year. If they refuse to agree to the new policies, their pay would be reduced to $48,000 at the start of the next term.

At the same time, Lesher is proposing the board agree with a recommendation from Presiding Constable Bill Lake and provide them with body cameras and tasers for self defense and offering them deputies.

It’s an interesting approach to take when the county has been short on constables, as two quit and one was tragically shot and killed serving an eviction.

Speaking of which, the supes will pick a Justice of the Peace District 10 constable from a list of three names, which are John M. Cammarano, Anton R. Chism, Sr., and Christopher Robison. The appointee will replace Michael Stevenson, who resigned last month.

Lesher is also recommending that the board adopt a sweeping no-smoking/no-vaping policy that would preclude smoking anywhere on county property or adjacent to county property (not sure how that’s gonna work).

Specifically, he wants updates on how much voting centers over precinct voting saved the county and how the selection process went for poll workers. He also wants to know what the Elections Integrity Commission’s reports of “derogatory” correspondence has to do (if anything) with the US Department of Justice’s announcement that it was watching the election.

The Tucson City Council is again looking at projects that are slated for the next round of the Regional Transportation Authority funding that could start in 2026.

Council members already had their first look at the projections last month. It’s a simple and timeless problem. The RTA’s Technical Management Committee has identified $4.6 billion in county-wide needs and $2.3 billion in funding.

So something has gotta give. Tucson has most of the people and wants a good chunk of the money. The nine different jurisdictions across the county all have the same number of votes. So there’s going to be some gamesmanship.

Also during the study session, the Council will get an update on voter-approved bond and sales-tax projects.

In all, the voters gave the city $662 million to invest. Now the council will get an update on where the money has gone, how much is left and what will be spent.

The Oro Valley Town Council will receive an update on park construction paid with voter-approved bonds. The major project is a $33 million expansion of Naranja Park. Does that seem like a lot for a park?

But it’s down apparently from $50 million because the progress report discusses $17 million in savings. A park like that better come with a guy named Roarke, ready to send you back in time to headline Woodstock.

This will basically allow Marana to grow without running out of water legally available to the community.

At the same time, the council is slated to vote on a change to the town’s zoning code to establish rules for solar storage facilities.

This item isn’t about solar panels but solar-charged “batteries” of sorts to be tapped when needed.

The Tucson Unified School District Superintendent Gabriel Trujillo is set to get another contract starting July 1, 2023 and running for three years. The TUSD Governing Board is set to discuss his contract during Tuesday’s meeting.

What’s this? TUSD hasn’t chewed up and belched out a superintendent in a matter of months? Prior to Trujillo, the district cycled through six superintendents in 17 years.

If he served out his contract, he’d be on the job for eight years.

On the other hand, TUSD will review a set of test scores that show it lagging far behind the rest of the state.

Just 23 percent of the district’s 8th graders passed the AzMERIT standardized test for English and language arts and 12 percent passed the math portion. That’s compared to 36 percent statewide on English and 27 percent for math.

The district blames the lag on coronavirus and shutdowns, but the grades weren’t much better in 2019, when 24 percent English and 18 percent passed math.

Old policies, the good and bad

Amphitheater Unified School District leadership is asking the Governing Board to review a “zero-tolerance” discipline policy for high school athletics.

The 20-year-old policy is a relic of the “crackdown” days of yore when zero tolerance seemed like a good idea. Opinions on the notion have since changed, apparently. Seems it was a good bumper sticker but hasn’t worked as promised.

Zero tolerance means zero distinction and assumes all offenses are equal and undistinguishable. That is, on its face, horse hockey.

Did anyone know that Vail Unified School District offered a Mandarin Chinese immersion program at Mesquite Elementary School? This is news to me but apparently Vail loves it and took the kindergarten to 1st grade program and expanded it for another eight grades.

Well, now the district is talking about adding a Spanish-language immersion program at Cottonwood Elementary.

If this idea can avoid the culture war, it will be the best thing that happened at a local school all year.