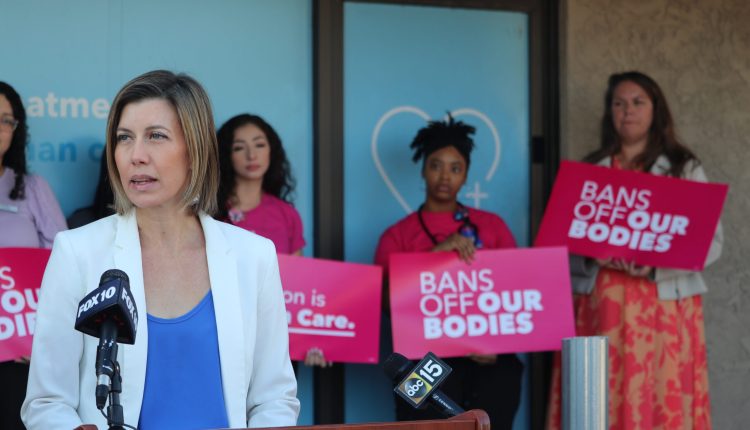 Planned Parenthood of Arizona is resuming abortion care services after a months-long pause amid uncertainty over whether doctors could face criminal charges for performing the procedure.

The organization, which runs four of the state’s nine abortion clinics, is currently challenging the reimplementation of a near-total abortion ban from 1864 that carries with it a mandatory 2 to 5 year prison sentence for doctors who perform an abortion for reasons other than saving the woman’s life.

A 15-week ban passed this year conflicts with that law, abortion advocates argue, and meant providers didn’t know which law would be enforced. A little over two weeks ago, a court agreed to pause the 1864 law while Planned Parenthood of Arizona’s challenge to the Civil War-era law works its way through the appeals process.

That ruling, CEO Brittany Fonteno said, helped assuage some of the organization’s hesitancy and gives them the legal clarity needed to restart appointments at three of its four clinics in Glendale, Tempe and Flagstaff. All of the clinics paused services after the U.S. Supreme Court stripped women of the constitutional right to abortion by overturning Roe v. Wade in June.

The group’s Tucson clinic had already resumed providing the service in late August, simply because of logistical reasons and more provider willingness in the area, Fonteno said. Pima County Attorney Laura Conover, who theoretically could prosecute providers in violation of the 1864 law, has stated she will not do so, and Tucson Mayor Regina Romero oversaw a city-wide resolution to instruct police not to make any arrests over abortion law violations.

“I’m thrilled to announce today that Planned Parenthood of Arizona has officially resumed abortion care in our health centers across the state,” Fonteno said on Thursday morning, standing outside the organization’s Tempe clinic. “As of today, we are now taking appointments for abortion services.”

While the news is a welcome respite for women who had been forced to travel across the state or leave it entirely to receive abortions, Fonteno warned the relief may be temporary, as the 1864 ban is still a looming threat. The legal battle between Planned Parenthood of Arizona and Republican Attorney General Mark Brnovich, who sued to remove an injunction blocking the law shortly after Roe v. Wade was overturned, is far from over.

“While we are celebrating today, we cannot ignore that we are still on a long and uncertain path to restoring the fundamental right to abortion in Arizona,” Fonteno said.

A ruling on Tuesday in a separate challenge from Arizona doctors and abortion providers guaranteed the 1864 ban would be paused for at least 45 days, leaving abortion access up to 15 weeks intact until next year.

Along with the state-level threat is a federal one, added Planned Parenthood Federation President Alexis McGill Johnson. The upcoming midterm elections will decide which party controls Congress, and while Democrats have signaled an interest in codifying abortion protection nationally, Republicans have moved in the opposite direction, favoring a national 15-week restriction or even an all-out ban.

In at least 12 states, abortion access is currently heavily constrained or under threat. That tightened access only serves to worsen inequality, Johnson said.

“The reality now is that abortion bans have eliminated all or some access to abortion, forcing a public health crisis. The ultimate goal (of Republicans) is a nationwide ban that will most deeply impact folks already living at the margin, and communities already facing the most barriers to health care: Black and Latino, immigrant communities and those with low incomes,” she said.

OBGYN and Planned Parenthood of Arizona’s Medical Director Dr. Jill Gibson said that reopening the doors to patients seeking abortion, for which the organization will offer medical and surgical procedures up to 15 weeks, is heartening after the legal back and forth that left doctors handcuffed by politicians.

“The past 120 days have been unbelievably challenging. They have been traumatic,” she said. “We have had to call our patients, canceling their appointments mere hours before they were scheduled to have an abortion, because extremist and anti-abortion politicians who have no medical knowledge or training and who haven’t lived the life of the patient in that exam room, believe they should be able to make medical decisions for my patients — decisions that should be made between a patient and their provider.”