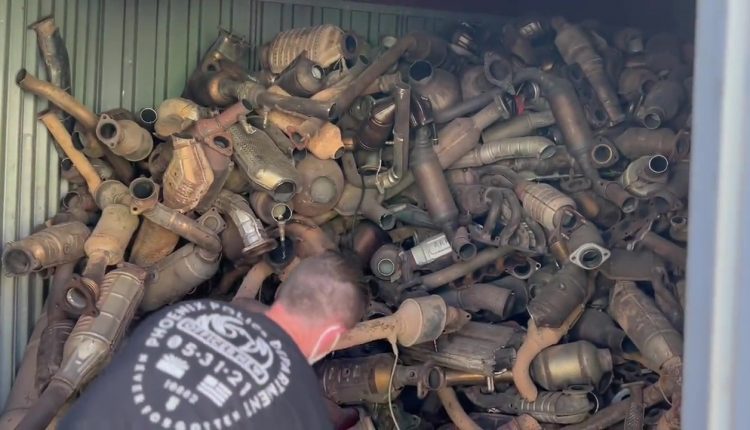 In a video posted to Twitter, Phoenix Police officials say a months-long investigation into a suspect suspect of buying and selling catalytic converters led to a bust of over 1,000 used and detached catalytic converters from a storage unit. The units were recovered while officers were serving a search warrant.

PHOENIX – Officials with the Phoenix Police Department say they have recovered over 1,000 catalytic converters.

News of the recovery were announced by police in a tweet that was made on May 26. In the tweet, officials say they found the used and detached catalytic converters while serving a search warrant at a storage unit.

“This concludes a months long investigation into a suspect suspected of buying and selling them,” read a portion of the tweet made by police. Officials did not otherwise release any other details surrounding the investigation, nor did they say if any arrests have been made.

In 2020, Phoenix Police took 715 cases of reported catalytic converter thefts, up from 72 in 2019. In 2021, there was a boom of over 4,700 cases, and through February 2022, Phoenix Police have taken 690 reports, with some cases possibly including multiple stolen converters.

Other cities in the Phoenix area are also seeing a spike in reported catalytic converter thefts. In Mesa, police saw a climb of 814% in stolen converter cases in 2021 with 631 reports. Chandler Police reports a little more than 400 cases, compared to only 22 in 2020, and already 117 cases this year through February.

More tips can be found here.

Remote voting in the U.S. House hits a second anniversary, but it may be its last