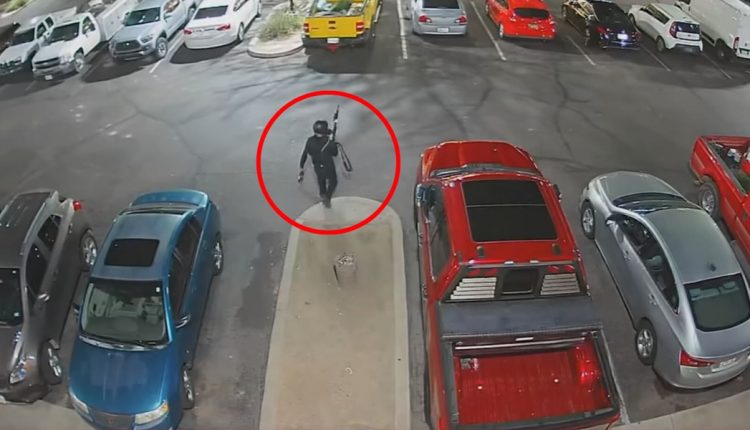 The video shows the suspect, later identified as 24-year-old Isiah Williams, leaving his room at Days Inn near 26th Avenue and Deer Valley Road on Aug. 28. He was wearing a helmet, a ballistic vest, a gas mask, knee pads and was armed with a rifle and a Molotov cocktail. When Williams goes outside, the video shows him firing at different cars. Thirty seconds into his shooting, he shoots at a white car that pulled into the parking lot, killing two people in the car. The victims were later identified as 44-year-old Karla Garzona and 36-year-old Misael Arevalo.

Three other people in the car get out and run off. Williams continues to walk around the parking lot, shooting at empty cars. He then throws the Molotov cocktail at a nearby Waffle House but the window didn’t break and the cocktail didn’t catch fire. He went back to the Days Inn front office, and aimed his gun inside but didn’t shoot anyone inside. For the next few minutes, he continues to fire his gun randomly with the bullets traveling across Deer Valley Road, hitting cars and buildings. Some people were hit and injured.

When police officers showed up, surveillance video shows they were met with a hail of gunfire. One officer was shot and another was hit with shrapnel in multiple places, including his face. One of the injured officers was pinned down by gunfire while others devised a plan to safely go rescue him. Unfortunately, officers didn’t activate their body cameras so there’s no video. Officers got the injured officer and loaded him into a Tahoe police and drove him to the hospital. When the shooting stopped, officers found Williams dead after he shot himself.

Investigators said they found 200 spent rifle rounds, five empty magazines, unused flashbangs, and other tactical equipment. Both officers are out of the hospital. The investigation is ongoing.