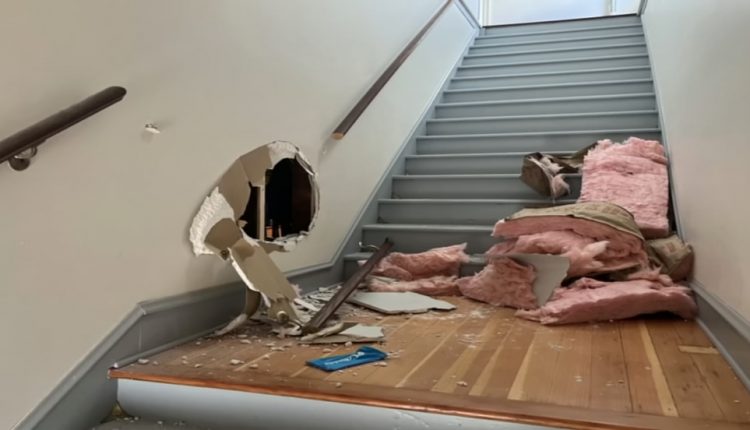 Matt Froman’s father owned the building for nearly 20 years until he took ownership of the building in 2018, completely renovating the inside while keeping its historic charm.

“The last two years have been blood, sweat and tears working along contractors,” Froman said.

What once was a pharmacy for the neighborhood has been transformed into an office and retail space for several small, locally owned businesses.

Then, early Monday morning, Froman said a burglar broke in, essentially destroying years of hard work in one night.

“The perp stole a U-Haul from down the street on 45th and Powell and brought it up here where they parked it in the back parking lot, scaled it, got on the roof, and busted a window to climb into the second story, he said.

Not only did they ransack each business once they got in but they destroyed the building itself. Froman took pictures of a shattered window and holes in the drywall the suspect climbed through.

“This is the patchwork of the hole, of how the perp got between office to office. Literally they just threw their foot through the wall, made a whole then climbed through, ripped out the insulation,” Froman said.

While the repairs will cost him about $10,000, he said he feels for his tenants who can’t use their office until they reopen next week.

“It’s definitely hurtful,” he said. “Not only are we dealing with the damages, we’re dealing with these people who lost a week of work, as well there’s an emotional aspect of being violated and broken into.”

Now he’s beefing up their security with cameras and reported this burglary to Portland Police.

“We’re just going to keep fostering the phoenix and deal with one challenge at a time as they go because we know this isn’t the last one,” he said.

If you’d like to help, Froman said there will soon be a GoFundMe on their website, but you can always support the businesses by stopping by.