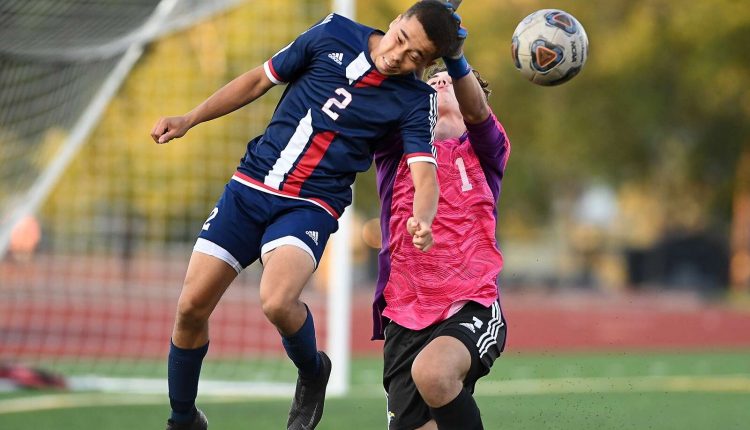 In a hard-fought battle, Eagle Point was able to score the decisive goal midway through the second half and topple host Phoenix for a 2-1 boys soccer victory Tuesday at Jack Woodward Stadium.

Start time for the game was pushed back by an hour to 7 pm to help with extreme heat conditions.

“The boys played hard,” said Phoenix head coach Chris Gallegos, whose team is ranked No. 6 at the Class 4A level. “I made this schedule for a reason, to play hard games before starting conference play. Every game it seems we have a target on our back, it doesn’t matter who we play, whether it’s 6A, 5A or 4A, they all want to beat us every game because of where we’re at so I just tried to tell the kids it’s going to be difficult every game and we’ve just got to be ready for it.”

Class 5A Eagle Point (1-0) was certainly ready for the matchup on the Phoenix Talent Rising Field turf, getting a goal six minutes in off a shot in the middle of the box by Jameson Struble.

Daniel Palomino nearly had an answer for Phoenix (0-2) later in the first half on a 32-yard rocket of a free kick that was handled nicely by goalkeeper Trenton Silani, who didn’t allow for a rebound effort as he dipped to his knees to make the stop.

In the 32nd minute, however, the Pirates’ steady pressure finally paid off as a cross by Erik Reyes-Medina was cleared by the Eagles but not far enough. Phoenix was able to send the ball back toward Jenner Selden, who settled the ball and slipped a pass over to sophomore Victor Peral and he followed with a driving shot inside the near post for an equalizer.

The 1-all score held up until the 53rd minute, when Eagle Point was finally able to get back on top. Cesar Campuzano sent a low, sinking direct kick over the Phoenix wall of defenders from 20 yards out and, with struble closing in as if he would re-direct the shot, Pirates goalie Julius Bolstad had his momentum flowing right with the runner.

Unfortunately for Bolstad and the Pirates, the ball went untouched and he tried to reach back with his left hand but it was too late as Campuzano’s effort dipped under for the go-ahead goal.

The Pirates tried in vain to answer, with Selden’s whirling effort in the waning seconds just ricocheting off Silani and out of bounds as time expired.

“We couldn’t finish tonight, it was just a little bad luck,” said Gallegos. “They literally had one true shot on goal. We had 12 but we could not bury the ball in the back of the net. We just couldn’t do it. We had so many opportunities and just couldn’t do it tonight, but we’ll get there, we’re working hard.”

Gallegos credited junior center back Dominic Crenshaw with a clamp-down performance against several of the Eagles’ top playmakers.

SOUTH MEDFORD 2, ROSEBURG 0: At Roseburg, sophomore Alexie Reyes tallied a goal and assisted on the other as South Medford came alive in the second half to take down Roseburg in the Southwest Conference opener.

Kyle Denn put the Panthers (1-1, 1-0 SWC) on the scoreboard in the 57th minute from about 25 yards out at the top of the box on Reyes’ assist. Moments later, after recovering the ball in Roseburg (0-1-1, 0-1-0) territory, Reyes dribbled up and buried a shot of his own from about 30 yards out to put the contest out of reach.

The Panthers’ play in the midfield was superb as well with Eloy Saucedo, Steven Calvillo and Felix Valenzuela leading the way.

GRANTS PASS 2, NORTH MEDFORD 1: At Grants Pass, North Medford junior Matt Donovan gathered a nice through ball following a takeaway just inside Black Tornado territory and with a deft touch found some space on the left side and ripped a low near-side shot just inside the goal post and under the arm of the Grants Pass goalie to give North a 1-0 lead in the final four minutes of the first half.

In the second half, however, Grants Pass tied it on a clever 15-yard shot from the left side by Porter Boersma about eight minutes into the half. Not long after, Boersma sent a corner kick into the box that Pedro Gonzalez was able to sneak into an open space and send a go-ahead header into the net.

North Medford dropped to 1-2 overall and 0-1 in Southwest Conference play, while GP moved to 1-0 in both.

CRATER 8, MAZAMA 0: At Klamath Falls, senior Cooper Hopkins scored a hat trick for Crater and freshman Trevor Wilkerson added two goals as the Comets were able to close out the game in the 71st minute by virtue of the mercy rule.

NORTH MEDFORD 1, GRANTS PASS 1: North Medford sophomore Olivia Boger scored on a header off a corner kick by Isabella Driskell to tie the match with nine minutes to play at Bowerman Field.

Grant’s pass had broken a scoreless tie about eight minutes earlier when Ava Hickman took advantage of a little defensive miscommunication and was able to get the ball wide to Mia Thompson. After a couple dribbles, Thompson sent a left-footed crossing effort toward the goal under pressure and it was able to sneak under the hands of goalie Margaret Hamlin.

CRATER 2, MAZAMA 0: At Central Point, Crater’s Kamdyn Johnson helped put the pressure on Mazama early with a goal in the third minute as the Comets claimed their first victory of the season in the nonconference contest.

Johnson’s goal was assisted by Ella Heppner and Joslyn Sizemore gave the Comets (1-2-1) a 2-0 advantage at the 32-minute mark with a shot that found the back of the net on a setup from Emma Bohn.

EAGLE POINT 2, PHOENIX 1: At Eagle Point, Phoenix grabbed an early lead but Eagle Point, in its season debut, was able to outlast the Pirates with two goals in the second half and claimed the nonconference affair.

Sophomore Carsyn Gallegos corralled a ricocheted shot off of the goalkeeper and drove it into the back of the net to put the Pirates (0-2) up 1-0 in the eighth minute.

The Eagles (1-0) struck with the tying goal in the 45th minute and took the lead at the 51-minute mark.

With about 20 seconds left, the Pirates were setting up for a corner kick that would have given them an opportunity to tie but were unable to get the kick off before time expired.

Junior goalkeeper Jayden Vos turned in a solid evening for the Pirates with 10 saves.

Andy Atkinson / Mail Tribune Eagle Point’s Jeremiah Cordle goes up for the ball during the 1st half at Phoenix High School Tuesday evening.