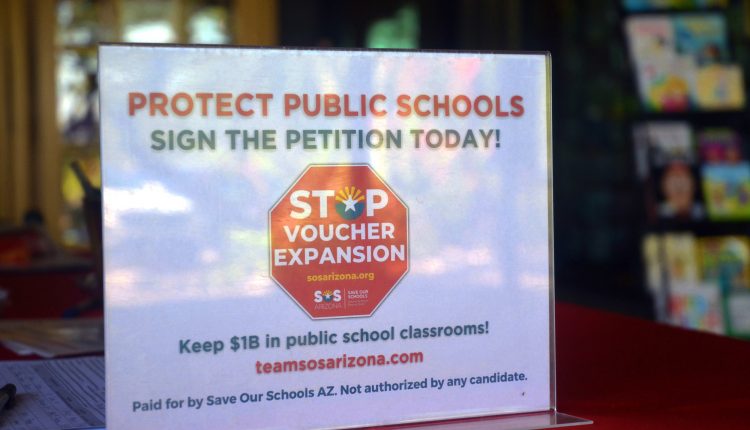 It’s nearly 100 degrees outside, mosquitos are beginning to swarm and protesters are shouting nearby, but none of that seems to be dampening Raquel Mamani’s mood.

“I put this over it so it wouldn’t confuse people,” Mamani says, grinning ear to ear while holding up an old “No on 305” yard sign that had pieces of paper taped to it with the words “sign here” on it.

Mamani is a parent, teacher, volunteer and chair of the Save Our Schools Arizona PAC, which is currently attempting to gather 118,823 signatures by Sept. 24 to let voters decide if a law expanding the state’s Empowerment Scholarship Account program to all 1.1 million Arizona students should stand.

The organization has done this sort of work before — and so has Mamani — back in 2017, when the Arizona legislature passed a different measure that also expanded the ESA program to virtually every Arizona student. The signature-gathering campaign was successful, and voters in 2018 soundly rejected the ESA expansion, with 64% voting against it.

Now, the group is hoping to do the same thing once again.

Raquel Mamani poses with an augmented sign left over from the 2018 campaign to overturn the legislature’s attempt to greatly expand school vouchers. Mamani and other public school advocates are once again trying to force a vote on a school voucher expansion that lawmakers approved earlier this year. Photo by Jerod MacDonald-Evoy | Arizona Mirror

But this year could see a much different campaign than in 2018. While outside groups supporting private school vouchers and school choice supported the ESA expansion, they largely stayed on the sidelines during the referendum campaign. This year, outside groups are already funneling money in to support the expansion of the ESA program.

Ducey says Arizona is the ‘gold standard for educational freedom’

More than a month after Gov. Doug Ducey signed the nation’s most expansive school voucher program into law, he gathered with proponents of the measure to hold a ceremonial signing of the bill.

At the same time, opponents are gathering signatures in an effort to let voters decide the fate of the measure in 2024.

The Empowerment Scholarship Account program, commonly referred to as ESAs, has had strictly limited eligibility since its creation in 2011. Eligible students include children attending failing public schools, children whose parents are in the military, kids who are in the foster care system and students living on Native American Reservations.

But House Bill 2853, which Gov. Doug Ducey signed on July 7, allows all 1.1 million Arizona students to get an ESA account.

“Over the past eight years, and it has taken all of the eight years,” Ducey said, alluding to the difficulties the Republican legislature and executive has had getting an ESA expansion passed while speaking at Phoenix Christian High School on Tuesday.

“Arizona is now the gold standard for educational freedom,” Ducey said before the crowd of supporters that included lawmakers such as Rep. Ben Toma, R-Peoria, who sponsored the bill and Ducey called the “MVP” of the legislature.

The governor thanked the American Federation for Children, who was present at the event, for their support. The Betsy DeVos-funded organization has been rallying against the effort by groups like Save Our Schools Arizona who are attempting a referendum on the bill, and the group also poured funding into independent expenditures against Republicans who opposed the ESA expansion.

Legislative budget analysts have said that only an estimated 25,000 students would likely take advantage of the expanded eligibility. About 11,000 use it currently; many of the new enrollees are likely to be from affluent families who already send their children to private schools, critics say.

ESA dollars can be spent on anything a student needs, from private school tuition to tutoring or to homeschooling materials.

ESA proponent Drew Anderson, a Phoenix pastor, compared Ducey to President Abraham Lincoln for his signing of the ESA expansion, saying that the program will give children the opportunity to “rise out of poverty.”

And there’s an organized effort of parents who support the program and are making their voices heard in opposition to SOS AZ.

Some protesters held signs from the American Federation for Children, a political nonprofit funded by former Trump administration education secretary Betsy DeVos that pushes for privatization of schooling and was found last year to be involved in sending fake news reports to local news stations.

Not just a referendum on ESAs

The Empowerment Scholarship Account program, commonly referred to as ESAs, has been narrowly implemented since its creation in 2011. Eligible students include children attending failing public schools, children whose parents are in the military, kids who are in the foster care system and students living on Native American Reservations. Currently, roughly 11,800 students are enrolled and receive the voucher money.

But House Bill 2853, which Gov. Doug Ducey signed on July 7, allows every Arizona student to get an ESA account — including those who already attend private schools — to pay for their education.

The bill was at the center of budget negotiations this past session: Republican critics of the proposal who had defeated previous efforts voted for it in exchange for about $800 million in new funding for public education.

Legislative budget analysts have said that only an estimated 25,000 students would likely take advantage of the expanded eligibility. About 11,000 use it currently, and critics have said that many of the new enrollees are likely to be from affluent families who already send their children to private schools.

ESA dollars can be spent on anything a student needs, from tuition for a private school to tutoring or to homeschooling materials. They can also be socked away for college tuition.

“They are absolutely incensed that lawmakers did this,” Beth Lewis, executive director of SOS AZ, said about voters. “It is incumbent on us to elect a new legislature while this new law is on hold.”

If SOS AZ collects enough signatures, the law will be on hold until at least the November 2024 election. If voters reject it, as they did in 2018, the expansion will be repealed; if they approve it, the law will go into effect as soon as the election is certified.

Mamani said that, during this midterm election and the next general election, SOS AZ plans to be “vetting who truly is public school proud” in an effort to ensure similar bills don’t make their way through the legislature again.

SOS AZ has put more than 15,000 petitions into the hands of volunteers across the state, tasking them with gathering signatures in the dead of summer.

“We are all very jealous of the pictures we get from Flagstaff,” Lewis joked about volunteers working in the summer heat.

During a recent signature-gathering event, Mamani and her colleague Bridget Olson continuously fanned themselves off even in the shade, making sure to drink plenty of water during their two-hour shifts. The heat isn’t the only thing that happens to heat up though during the signature gathering, especially now that groups have caught on to the places where the events are taking place.

Just outside of the Changing Hands Bookstore was a small group of people with signs, some reading “Don’t sign anything from Arizona SOS” (a refrain repeated earlier this year by gubernatorial candidate Kari Lake) while others touted “school freedom.” All of them implored people not to sign the petitions.

For the most part, things have been cordial with only a few interactions where people have been “getting in their faces” of volunteers, according to Lewis.

“The way people talk to each other on the internet is very different than in real life,” Lewis said. “It doesn’t become a dangerous issue or a hyper-polarized issue. We’ve had really good conversations from people from all walks of life.”

For Mamani, the experience was new. As she spoke to the Arizona Mirror, one protester on the sidewalk continued to shout, attempting to keep people from signing the petition.

“The public is on our side. You see teachers in red shirts and you want to go and sign,” Lewis said.