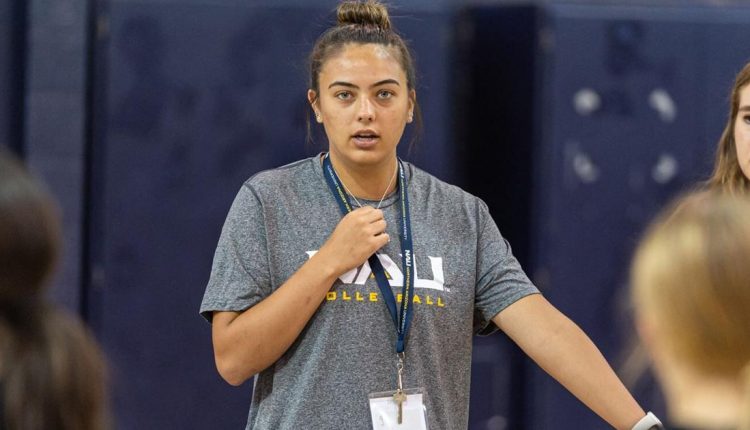 The Northern Arizona volleyball team dipped into the reigning 5A Conference state championship Horizon High School team twice in filling out their 2022 freshman class with the addition of Eden Driescher in the spring.

Driescher, a 5-foot-11 opposite hitter who like her varsity teammate and current Northern Arizona classmate Keira Hall, will be making the trip north for the start of preseason camp in a couple of weeks.

“Eden is someone who was on our radar for a long time,” said Lumberjacks coach Ken Murphy. “She’s a really solid player and she brings a lot of enthusiasm to our team. Her primary position has been as a right side and she’s always had a good arm over there. She’s contributed to a lot of successful teams and we’re looking forward to see what she can do at our level.”

Dreischer and Hall were part of Horizon’s 38-5 state championship team as seniors last fall. The Phoenix native starred on the right side, averaging 2.4 kills per set and hitting .375 in her final season while also adding 67 service aces to her tally.

Dreischer was also club teammates with Hall at Revolution Volleyball Academy and together they also had championship pedigree there, helping the club reach the USA Volleyball Girls Junior National Championship (15 American) in 2019.

Q: What was it about NAU or NAU Volleyball that excited you when committing?

A: Since I was 9, I’ve always wanted to go to NAU. I’m a walk-on, so as for playing volleyball, I didn’t know if I wanted to play, but I really loved the coaches. I thought it was a great time to ask them and I got on the team, so it’s been really cool.

Q: Since you’ve always wanted to come to NAU, what was it about the university or the City of Flagstaff that gained your interest?

A: I’m originally from Phoenix and it’s really dry, so I loved coming to Flagstaff and being able to breathe fresh air. NAU also has a really nice physical therapy program that I’m striving to get into.

Q: What do you bring specifically to the volleyball court?

A: I am very loud on the court. I would say I’m kind of annoying, but I love to be loud. I don’t like bad vibes out there, so I try to bring happiness as much as I can.

Q: What is one word to describe you as a volleyball player?

A: I would probably say energetic.

Q: What is the one thing away from the volleyball court you’re hoping to accomplish or explore over the next four years in Flagstaff?

A: I would really like to explore and prove myself since college is so new. I’ve always been a really high academic student and I’m going to strive to get good grades, and I also just want to have fun.

Q: You’ve expressed going down the physical therapy path. What is it about that field that interests you?

Q: You were high school teammates at Horizon High School with Keira Hall. How will having a familiar face alongside you help in your transition to NAU?

A: It’s going to make it a 100 times easier. I’ve already made connections with the rest of my teammates, but having Keira here is so nice because we lean on each other when it comes to volleyball and we’ve played together since we were 13 years old. It’s a great opportunity for both of us.

Q: What is one fun fact about yourself?

A: I like to be outdoors. Whether it’s going on bicycle rides, hiking or going on walks, that’s a lot of fun for me.