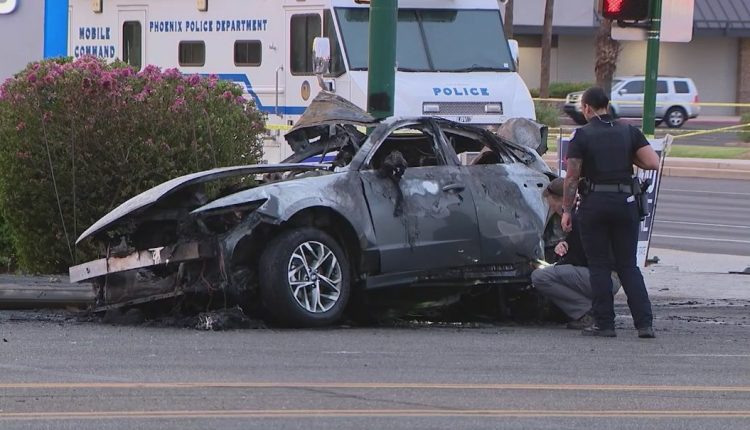 As the investigation continues, questions about liability are starting to come into focus, and FOX 10’s Nicole Garcia spoke with a lawyer about the additional complications that could come when a rideshare vehicle is involved in a crash similar to this one.

PHOENIX – As an investigation into a deadly crash in north Phoenix continues, questions of who is financially liable for the crash are starting to surface.

The incident happened near 43rd Avenue and Thunderbird. According to initial statements, Phoenix Fire Department crews responded to the scene at around 2 am on July 22, and found multiple crashed cars, with one fully engulfed in flames.

One of the people who died, according to loved ones, is Terry Hill. Hill was working as a Lyft driver at the time of the crash, and the GoFundMe set up for Hill says he was driving for the rideshare company that night to provide for his wife and their son. Hill was reportedly on his last ride of the night when the crash happened.

The other two people who died were reportedly Hill’s passengers.

Two of the three families in this tragedy have set up GoFundMe accounts to raise money for funeral expenses, and to take care of the children that are now left without one of their parents.

According to a Phoenix area attorney, more and more Lyft and Uber passengers are lawyering up after getting hurt in a car accident during their ride.

“These accidents, we have seen an uptick. We see it almost on a weekly basis,” said David Shapiro.

“Because it was a stolen vehicle, there’s probably no applicable insurance,” said Shapiro.

In most car accident cases, the injured driver can sue another driver who is at fault. However, in cases like this, since it was not the rideshare driver’s fault, the rideshare company may not be liable for their customers’ injuries, or even death.

“They do have liability insurance, it’s true, but if you’re inside the Lyft or Uber, the driver is not at fault. They’re not required to carry UIM insurance for their occupants,” said Shapiro.

Shapiro said frequent riders should have both uninsured motorist and underinsured motorists coverage on their own car insurance policies, which would help with unexpected expenses and losses that rideshare companies and other drivers do not cover.

“Those are things you can’t replace. It’s not a car. It’s a human body,” said Shapiro. “If you have a big ticket hospital bill, surgeries you need in the future, some health insurance won’t cover accident related expenses.”