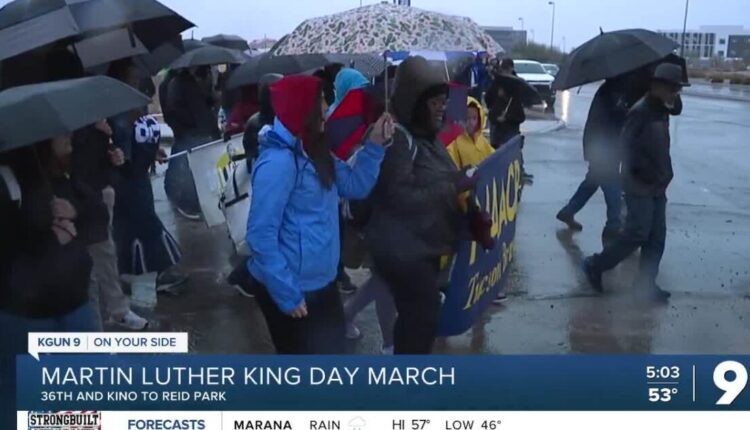 TUCSON, Ariz. (KGUN) — A cold, steady rain did not the people prepare to march in this year’s parade for Martin Luther King. Marchers see the march as a matter of dedication.

The history of the Civil Rights movement is full of dangerous marches into hostile conditions so a little rain was not going to stop Tucson’s march.

The march began with a prayer:

To remember Doctor Martin Luther King, his legacy, and the hopes to build on his achievements, some determined marchers gathered on Martin Luther King Way to push through the rain in his honor. Organizer, Pastor Grady Scott knows Doctor King and other activists faced arrest, beatings and murder when they marched for civil rights.

Pastor Scott says, “Doctor King endured more than what we’re enduring right now and so we’re grateful to be able to celebrate this day.”

The march ran almost four miles. Marchers moved north on Kino Parkway and east over the 22nd Street Bridge towards a celebration at Reid Park.

Daniel Linden, III made a point of marching with his daughter.