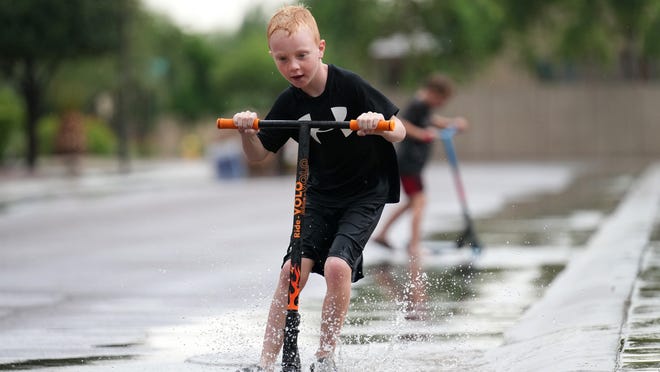 Rain falls over the Phoenix Metro, bringing cooler temperatures with it

A low atmospheric pressure system moved over Arizona Sunday morning, bringing the risk of thunderstorms in the center of the state and more rain in the highlands during the day and beyond.

The rain began early in the morning, and parts of Phoenix saw 0.04 to 0.12 inches of precipitation from 5 a.m. Sunday through noon, according to the National Weather Service.

While the National Weather Service reported that showers south and east of Phoenix were light at dawn, it was expected that more showers would develop as the system made its way through the state.

In the Phoenix Metro, the result was cloudy skies and cooler temperatures with an expected high of 86 degrees.

At 11:45 a.m. on Sunday, the West Valley saw less rain than the east, with the towns of Peoria and Surprise receiving 0.04 inches of rain since 5 a.m., according to Maricopa County’s Flood Control District map, despite a gauge in near Litchfield Park was recorded nearly a third of an inch.

Pinnacle Peak in Scottsdale had over a third of rain according to the Maricopa County Flood Control District Map, while other areas of the city were about 0.2 inches by noon.

The National Weather Service in Flagstaff warned of the possibility of stronger storms with gusts of wind and the potential for flash floods or small hail, with activity being greatest in Gila and Apache counties.

The National Weather Service in Flagstaff posted a flash flood warning for the Jack’s Canyon areas south of Winslow until at least 1:30 p.m. on Sunday morning 326 and 337 due to the increased risk of flooding in these areas.

While the first system was expected to leave Arizona by Monday, forecasters predict more volatile weather for much of the week.

You can reach Breaking News reporter Steven Hernandez at [email protected] or on Twitter @The_HdzCo.