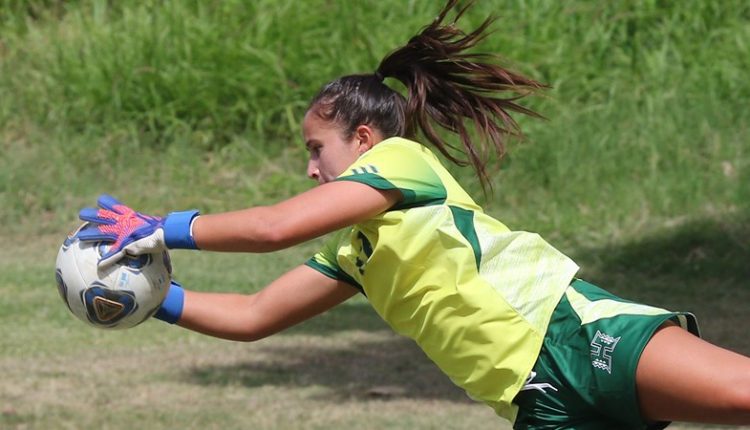 FLAGSTAFF, ARIZ.– In the lone exhibition of the 2022 season, the University of Hawai’i soccer team finished in a 1-1 tie Sunday evening against Northern Arizona at Lumberjack Stadium.

The Rainbow Wahine (0-0) remain undefeated all-time against NAU in the result, moving their record to 3-0-1 after the program’s first encounter since 2013. The Lumberjacks (0-0) ended their preseason schedule at 0- 1-1, as they came up short to Arizona, 1-0, earlier in the week,

A familiar name led the way for the ‘Bows as senior forward Kelci Sumida collected a pass from fellow senior Eliza Ammendolia to find the net for a 1-0 lead in the 38th minute. In 2021, Sumida led the team with five goals scored, while Ammendolia was tied for the team lead in assists with two.

The Lumberjacks didn’t take long to answer as they collected the equalizer in the 41st minute off the foot of Taylor Gomez.

The final 45 minutes proved to be a shoutout as both squads racked up the shots. UH held the advantage at the half, 6-3 on shots, but NAU followed it up with a 10-5 advantage. Junior transfer Sophie Augustin saw her first action at goalkeeper, relieving senior Lauren Marquez a few seconds into the second half.

Augustin picked up five saves in her efforts, keeping the Lumberjacks off the scoreboard for the eventual final.

Sunday’s match was the first and only tune-up for the ‘Bows before the start of the regular season. UH will go head-to-head with Western Athletic Conference’s favorite Grand Canyon on Thursday at 4 pm HT.