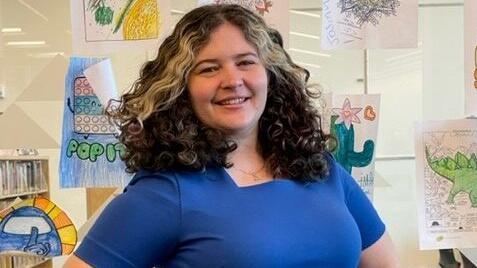 Rebellious Tucson librarian has the coolest job in the world

My first foray into librarianship came in May 2019 while interning at Marvel Entertainment in New York. I was tasked with helping keep their comic book archive neat and orderly. If someone wanted a comic, they had to come see me. The organizer of the dorm set aside for summer interns said, “Who knew something so boring could lead to something so cool?”

Library science is possibly the coolest thing in the entire world.

Libraries started being cool when I was in first grade and the staff at the Murphy-Wilmot Library hung my artwork in their children’s section. They kept being cool when I volunteered there for a couple of summers, helping with the summer reading program.

Then I went to college. I read every “Deadpool” comic book I could get my hands on in the San Antonio Public Library system. I took naps on the fourth floor of Coates Library at Trinity University where every other student was napping between classes. I mean studying. I studied so hard on the fourth floor.

I left the country after college. I had spent years of my life checking out manga (Japanese graphic novels) and anime (Japanese animation) from the library. Now it was time to live in Japan. One of my best moments happened when my culture shock-weary body realized that the Osaka Public Library functioned near exactly like the Pima County and San Antonio public libraries. I could get a library card because I knew how to get a library card. I could check out a book because I knew how to check out a book. I returned the book late because that habit still has yet to change (shh, don’t tell my colleagues!).

Three years later, I returned to Tucson and tried to figure out what was next. I saw an ad on Facebook for a school where one could earn their master’s degree in library and information science. I thought, “What if?”

I asked my mom, who said, “That’s exactly right for you.” I applied and was accepted to the University of Arizona’s Library and Information Science program.

When I told my friends my plan, not one of them showed any surprise that I was going to become a librarian.

At an event during alumni weekend in San Antonio, back at Trinity University, I spoke to a former professor who had written a letter of recommendation for me.

I said, “I don’t know, with librarianship. I’ve never been the rebel type but …”

Before I could finish, she remarked, “Oh, I think you are a little bit.” She never dismissed the idea that libraries were places of rebellion.

As a public librarian, I can be on that front line. As a teen librarian, I can connect teens with resources they may not know are available: Live tutors through Brainfuse and practice tests through LearningExpress Library.

I can show the teens that their privacy is just as important as an adult’s. I get to help them define themselves and give them space. I can keep an eye on challenged book lists, pull them off the shelves, and then hand said books to the teens saying, “Would be a shame if you read this book.”

With the library’s support, I’ve realized that I am perhaps a bit more of a rebel than I thought. With the guidance of my supervisors and colleagues, I’ve learned how to rebel through extreme empathy and understanding. The library is a place for anyone and everyone, with no questions asked. I’m trained to learn what someone needs, and show them that there are people who care, and care a lot.

Since becoming a librarian I’ve been able to play Among Us in real life, run a haunted house, experience VR, make mesquite pancakes, play a lot of chess, meet people from all walks of life, and make their lives just a little easier.

I have the coolest job in the world.

Paige Carlson is the teen/tween librarian at Flowing Wells Library. She is a member of The League of Awesome Librarians and lived in Osaka, Japan. She currently serves on the MegaMania, Biblio Lotus, Tween Services, and Young Adult Services teams at the Pima County Public Library.

U.S. to hit debt limit much sooner than expected, thrusting Congress into showdown