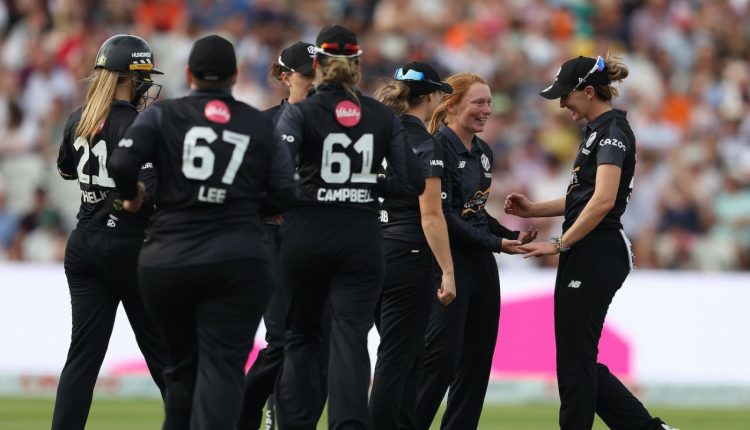 Manchester Originals left Birmingham Phoenix shellshocked by masterminding an 18-run victory at Edgbaston, successfully defending a total of just 122 to claim their second victory of the season.

England internationals Kate Cross and Sophie Ecclestone led the charge for the visitors, ripping through the home side’s star-studded top order to leave them spluttering at 22 for 5 after 34 deliveries. A plucky sixth-wicket partnership of 46 from Georgia Elwiss and Issy Wong kept Phoenix within touching distance of a stunning turnaround in front of a record attendance at Edgbaston, but it wasn’t to be as Originals held their nerve at the death.Wong, Emily Arlott and Kirstie Gordon had earlier bowled admirably to restrict the Originals to 122 for 6, a score that threatened to be some way under par until Phoenix found themselves rattled by an electrifying new-ball performance that put paid to their chances of moving up the table into second place for now.

The Phoenix reply got off to a rocky start from the outset. First Eve Jones popped one into the hands of Lee off Kate Cross for none. Then Amy Jones was clean bowled attempting to cut a Hannah Jones delivery that looked far too straight for such a shot, leaving the home side 10 for 2 after just 13 balls.

Captain Sophie Devine fell soon after for 4, then Ellyse Perry edged through to keeper Ellie Thelkeld a few sets later. When Ecclestone pinned Sophie Molineux in front, things went from bad to worse. Phoenix were now teetering on the brink at 22 for 5, still some 101 off the target.

An entering partnership from Elwiss and Wong bought Phoenix within arm’s length of a tight finish. Elwiss in particular looked to accelerate, smashing three fours in the rebuilding period as the duo put on 46 to leave them requiring 54 from the last five sets. After a quiet period, the Edgbaston crowd were briefly back to their usual raucous self.

But when Jones sent Wong’s bails flying after posting a valiant 24, it seemed a tall order. Elwiss soon followed back to the dugout for a fighting 32, and with her wicket the game was as good as sealed.

Earlier, Originals had started their innings off at a decent rate, as openers Lizelle Lee and Emma Lamb racked up 41 between them inside the powerplay. But it was an injection of pace that saw the first breakthrough – rapid England seamer Wong caught Lee bang in front lbw for 20, after having greeted her with a fiery bouncer the previous delivery.

Lamb fell not long after to Arlott for a streaky 30, driving uppishly into the hands of Elwiss. The new partnership of Erin Burns and Amy Satterthwaite struggled to find momentum, as Wong, Arlott and Gordon were able to dry up the visitors’ ability to find the boundary.

Phoenix’s pair of slow left-armers continued to apply the pressure, and not long after Gordon had breached Satterthwaite’s defenses and bowled her for 13, a mix-up off the bowling off Molineux saw new batter Ami Campbell run out for a duck.

Only Ecclestone was able to bring some impetus to the death of Originals’ innings. A quickfire 20 off 14 balls, including a slog sweep for six off Molineux, was just about enough to help her side post a competitive score

Letter: Who wants to go to Flagstaff? | The Verde Independent