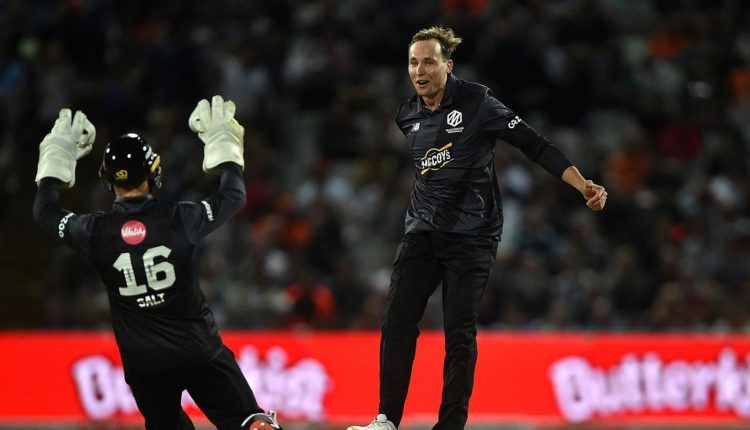 Manchester Originals won their fourth game in a row to set up a qualification decider against Oval Invincibles in the final fixture of the Hundred’s group stage, bowling Birmingham Phoenix out for 75 to silence a 20,836 crowd at Edgbaston.

Originals’ 154, which owed much to Phil Salt’s third fifty of the season, looked like a competitive score on a used pitch. Despite the absence of Liam Livingstone, Phoenix’s leading run-scorer, who was ruled out of the final stages of the tournament through injury earlier on Sunday, a short boundary towards the Eric Hollies Stand meant that the home side would have fancied their chances at the interval .But their chase never got going and their eventual total was the lowest across both seasons of the men’s Hundred, beating their 87 all out in the reverse fixture in 2021. Tom Hartley struck twice in the first five balls of the chase, removing Miles Hammond and Moeen Ali, and came back to dismiss Brett D’Oliveira and Ben Dwarshuis to return 4 for 22 from his 20 balls.

Will Smeed hit 31 off 17 but no other Phoenix batter passed 13, as Originals closed out a 79-run win despite the absences of Jos Buttler, their injured captain, and Andre Russell, who has left for the CPL. They will almost certainly qualify for the eliminator if they beat Invincibles at Old Trafford on Wednesday night.

However, Phoenix’s qualification hopes have taken a significant dent following a heavy net run-rate swing: they will need to beat London Spirit convincingly at Lord’s on Tuesday night to stand a chance of sneaking through to the play-offs.

Phoenix flounder
Laurie Evans made a brave move to throw Hartley the new ball at the start of the chase, after Moeen had used only 10 balls of spin in the first innings, with Imran Tahir surprisingly left out in favor of Dwarshuis, the Australian left-arm seamer , but his move was vindicated with two wickets in the first five balls.

Hammond, the left-hander, looked to reverse-slap his third ball over the infield and towards the short off-side boundary, but picked out extra cover, and after Moeen punched his first ball through point for four, he lost him off stump looking to swing down the ground. It set the tone for an abject Phoenix innings, which saw Chris Benjamin and Tom Helm dozily run out.

“We knew we had to use our cutters and spin options,” Hartley said. “We saw Southern Brave do it last year when they lost their first two games; we lost our first three but picked up good rhythm and the boys are really getting along. There’s no reason why we can’t [keep winning].”

Moeen described Phoenix’s performance as “a bit soft” after Josh Little had sealed the deal with two late wickets. “We’ve got some young players. Livi is a big miss, obviously, but players like myself have to take more responsibility. We were poor. We need to be a bit smarter at times.”

Brilliant Benny
Originals made a bright start thanks to Salt and Laurie Evans, reaching 73 for 1 at the halfway stage, but were pegged back by a superb spell in the middle of the innings from Benny Howell. After Evans had sliced ​​Kane Richardson to short third in the powerplay, Wayne Madsen scooped Howell straight to short fine leg where Henry Brookes took a sharp catch, having earlier dropped Salt on 8.

Howell’s changes of pace flummoxed Originals’ middle order on a slow surface, and he struck twice when bowling 10 consecutive deliveries between balls 71 and 80: Tristan Stubbs chipped a knuckleball to extra cover, while Paul Walter’s leading edge found Brookes, diving forwards at short covers. When Howell completed his allocation, Originals were 111 for 4 and struggling for impetus.

Salt Late City
Salt has been in excellent form in the Hundred and raced to a 33-ball fifty after an early reprieve, slog-sweeping Brookes over the shorter boundary and into the Hollies. But just as he was eyeing a launch at the death, he was controversially given out when Richardson skidded a full ball into his pad.

Salt opted to review after a long discussion with Ashton Turner and was furious when Alex Wharf told him that the 15-second timer had already run out by the time he had made his signal. Almost inevitably, replays confirmed that the ball had struck him outside the line of off stump. “We had to calm him down a little bit,” Evans told Sky, laughing.

Lammonby’s late blitz
Originals were 113 for 5 with 18 balls remaining after Salt’s dismissal, but a 41-run stand for the sixth wicket between Tom Lammonby and Turner hauled them up to a competitive score. Lammonby, playing his first game of the season, was particularly effective: he made 26 not out off 12 balls, scooping Richardson for four and Helm for six as Phoenix lost their way at the death.

“It’s a huge win,” Evans said. “They’ve been must-win games all the way through for us, ever since we lost three out of three. The boys were outstanding. We thought we were a little bit under par, but it turned out to be a pretty competitive score .”

Matt Roller is an assistant editor at ESPNcricinfo. @mroller98