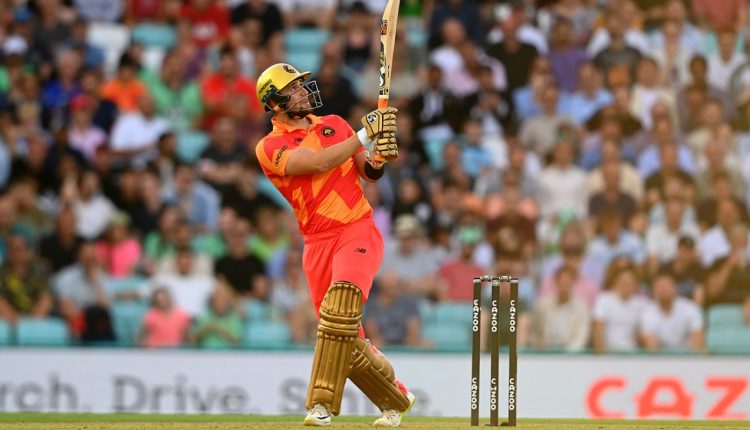 Kane Richardson struck twice in as many balls to seal a crucial Birmingham Phoenix success as they overcame Oval Invincibles by 10 runs to climb to third in the men’s Hundred table.

Richardson, who removed Jordan Cox and Invincibles captain Sam Billings with successive deliveries, finished with three for 22 at the Kia Oval, while fellow seamer Tom Helm claimed an impressive three for 11.

Those performances underpinned the Phoenix victory despite the best efforts of the Curran brothers, with both Sam and Tom clattering a flurry of sixes but their side fell short on 156 for eight.

Earlier, Liam Livingstone (45 from 32) and Moeen Ali (42 from 25) led the way as the visitors posted 166 for six, with their bowlers ensuring that proved to be a winning total.

Having endured a lean run in three innings since his unbeaten century against Southern Brave, big-hitting opener Will Smeed appeared to be back on track after Phoenix were put in.

Smeed thrashed 23 from the first 13 deliveries of the innings, including two sixes, but was undone when he misjudged a pull off Mohammad Hasnain and Sam Curran back-pedalled at mid-on to clasp the catch.

Moeen took over the baton with relish, compiling a 25-ball knock that contained four cleanly-struck maximums, including one off Sunil Narine, who bowled tightly overall to finish with two for 21.

Narine had the last word, persuading the Phoenix skipper to hole out following his 69-run stand with Livingstone – who began in sedate fashion before bursting into destructive mode against Sam Curran.

Livingstone dispatched the left-poor over the leg-side boundary three times in four deliveries, but he missed out on a second half-century of the tournament, skying Matt Milnes (three for 32) into the hands of long-on.

The Invincibles suffered a swift double blow as they slid to 11 for two in reply, with Will Jacks trapped lbw by Richardson – and using up a review in the process – before Rilee Roussouw perished to Smeed’s superbly-judged diving catch on the leg side.

Meanwhile, the out of form Jason Roy rode his luck, flicking one to backward square where Imran Tahir failed to hang on and then edging Richardson onto the stumps so that the bails lit up – yet stubbornly refused to fall.

But Roy (21 from 19) was unable to take full advantage, hooking Henry Brookes down the throat of deep square leg and the Invincibles appeared to be floundering, although Cox (32 from 29) and Sam Curran (30 from 20) kept their hopes alive.

Richardson’s yorker dismissed Cox and Billings was lbw first ball, but Tom Curran smashed 30 from just 12 deliveries before Helm had him caught on the boundary as Phoenix closed out the game.