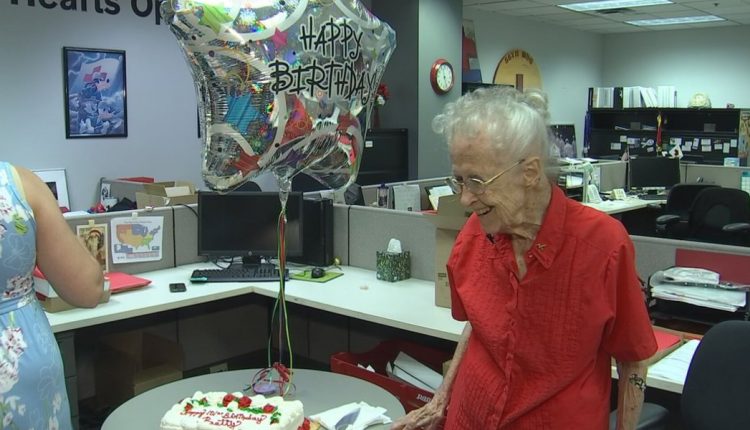 PHOENIX (3TV/CBS 5) — A woman who has spent more than eight decades volunteering for the Red Cross celebrated a special birthday. Betty Grenig celebrated her 101st birthday on Monday, but the Red Cross had a memorable party for her on Thursday at its regional headquarters in Phoenix. Some workers sang her happy birthday and gave her cake and balloons.

Grenig has had a heart for helping others since she was 17. That’s when she became a Red Cross volunteer. She was 20 years old when Pearl Harbor was attacked, and she had to change her wedding plans. Since her husband was in the Army, she traveled all over the world, including Japan, South Korea, and the Philippines. In every country she visited, she found a Red Cross office where she could at. Grenig spent her time caring for wounded soldiers while donating nearly 25 gallons of blood since she turned 18. Her last volunteer donation was in April 2003. “Virtually every piece that the Red Cross does, she’s touched. And she’s really emblematic that everything the Red Cross stands for about humanity and impartiality and she’s just a treasure to us,” said Kurt Kroemer, the regional CEO with the Red Cross.

Even though she doesn’t donate blood anymore, she volunteers at the Red Cross as much as possible. “As long as they have transportation, I’m happy to come out and do something. It makes my week,” said Grenig. She also had some advice for other volunteers. “Be dependable. It counts more than the hours. And stay until the job is done,” said Grenig.

As for a secret to a long and happy life, Grenig has a simple suggestion. “Just take care of yourself and help others and you’ll do well,” she said.