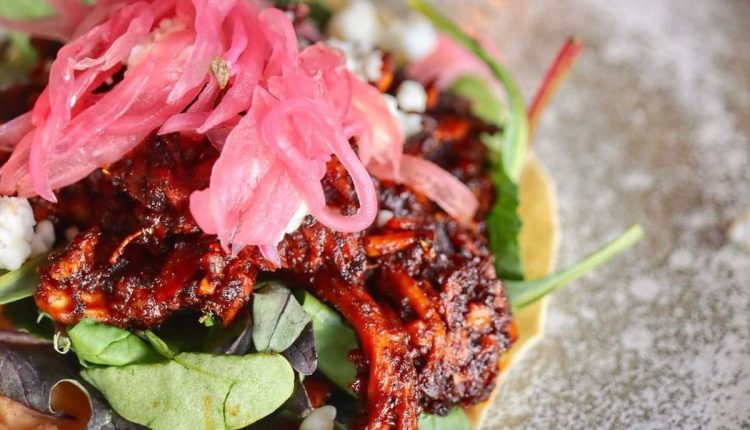 When I found out about the Chinese chorizo, an obscured historic food that originated from a forgotten legacy of 100+ Chinese grocery stores that once existed in my hometown of Tucson, I was having a mid-life crisis in the middle of the pandemic. I returned to the city to live at my parents’ house until I figured out where to go next.

20 years prior, I was living in New York City — plateauing a long, successful, and sometimes glamorous fashion career. When the pandemic hit, I took a big leap to become executive chef at a restaurant in downtown Manhattan. I quickly left the bear-like situation to indecisively proceed with whatever crossed my path.

With nearly nothing to lose, Tucson became my Walden. The less traveled path I chose came in the form of applying for the Nightbloom Grant offered by the Tucson Museum of Contemporary Art and the Andy Warhol Foundation for the Arts, which I stumbled upon during a late-night doom scroll. Somehow, I was awarded this prestigious grant. I proposed to build a cheeky 11-foot tall, large-scale, mosaic public sculpture of two linked Chinese chorizo ​​and had a loose plan for the Tucson Chinese Chorizo ​​Festival.

The story surrounding the Chinese chorizo ​​would soon find new life in mine. My Chinese family was not a part of the essential grocery stores that served as community centers on Tucson’s south side but, as immigrants, they faced the relics of the sinophobic immigration policy that early Chinese immigrants in America endured.

Exploited at wages 30-50% lower than their Anglo counterparts, Chinese immigrants worked hard labor jobs building railroads, mining, and farming. They built the infrastructure that expedited America’s expansion to the west and put America at the forefront of industrialization. Strategically accused of stealing jobs, they were branded as a barbaric race instead of being recognized for their achievements.

In 1882, the Chinese Exclusion Act made Chinese immigration illegal until 1943. However, a certain class of Chinese males: teachers, merchants, and ambassadors were allowed to remain in the country. Anti-miscegenation laws made interracial marriage illegal, and the earlier Page Act of 1875 prevented Chinese women from entering the country, making it nearly impossible for these select few Chinese to start a family.

Tucson became a safe haven for the early Chinese. They were able to find community in Mexican hospitality. They lived in low-income neighborhoods or barrios of south Tucson alongside the predominant Mexican, indigenous, and black families. These areas of town are where historic renovated million-dollar homes and the Tucson Convention Center now stand.

Because of this community support, the Chinese were able to build more than 100 Chinese-run grocery stores by 1950. These stores became the backbone of the munity. They spoke Spanish and Indigenous languages, they carried staple Mexican ingredients catering to their communities’ needs. The Chinese chorizo ​​was created in these grocery stores with what was available on hand. End cuts including bologna, hot dogs, and meat that was close to spoiling were transformed into an item of high demand by combining red wine, vinegar, and an amalgamation of various Mexican chilis and spices.

Perhaps the most important thing Chinese grocery stores offered was credit which allowed them to provide crucial necessities to the community during difficult times. El Charro Cafe’s boss Carlotta Flores told me that her family would get the groceries they needed for the day on credit, do the day of business, and then pay for the groceries later that night.

Nancy Funga local realtor, worked and lived in the back of her parents’ grocery store, T&T Market at 2048 S. Sixth Avenue, until the age of nine. Her family sold the business and bought Market Basket from the Fong family. She used to watch her father make Chinese chorizo.

“My father knew the customers that came in, their kids, you know, and he did the credit,” said Fung. “He would offer customers credit. They would just sign in a book saying how much groceries and they would come back the next month with their check to pay it. It was just family run. I mean, everyone knew everyone, and, back then, my father even did free delivery when they needed delivery. Customers loved him.”

Customers would sometimes bring in tamales with gratitude. This tight-knit community fostered an intimate mutualism not often seen in many modern-day consumer transactions.

I was struck with emotion when I realized that these strong community bonds still remain in practice after having a conversation with Ben Forbes from Forbes Meat Company. Forbes and his staff helped me produce over 600 pounds of Chinese chorizo ​​for this year’s inaugural Tucson Chinese Chorizo ​​Festival.

“I’m super grateful to just be able to give to you what this community has given to me,” Forbes told me.

Eight years after losing a job and going through a divorce, he explained he had “literally lost everything, like nothing…I had nothing.” Ben was living on food stamps fathering two girls with little less than a plan. When he got to Tucson he said “Every chef in the community just brought me in,” said Forbes, thinking back to when he moved to Tucson. “It was a dark and hard time…but it was serendipitous.”

I continue to be disarmed and moved by the enthusiasm, generosity, and supportive nature of the local community uplifting this lost American story at such a critical time.

The life that early Chinese immigrants were dealt was much like the scraps of the original Chinese chorizo ​​ingredients: made of leftover end cuts and meat close to spoiling, but brought to life with Mexican spices and wine. In hard times, instead of making lemonade, Tucson – the city of gastronomy – makes Chinese chorizo.

In Part Two, you will hear more of the stories Tucson families have to tell about the Chinese chorizo, their thoughts on the festival, and from the festival’s participating restaurants and dishes featured in the festival.

Throughout the month of October, and in partnership with Tucson Foodie, more than multiple restaurants participated as official destinations to celebrate the Chinese chorizo. There’s one more weekend left seven restaurants will receive two 15-pound donations of Chinese chorizo: one made with sustainably sourced meats, and one plant-based vegan.

It’s up to the chefs how they prepare the dishes and it’s your decision on how many destinations you visit each Friday-Sunday.