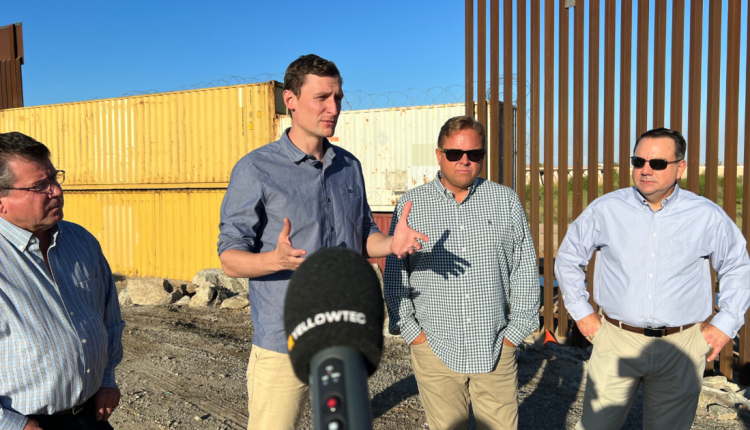 Masters said he wanted to see first-hand what people in Yuma County live with every day.

“It’s always great to be here, but it’s always tough to see what’s going on and what the people of Yuma have to deal with,” he said. “I’ve been talking to our brave men and women of Border Patrol this morning and I’m actually heartened to hear that Governor Ducey’s shipping containers, that’s helped.”

“Good on Governor Doug Ducey for closing this up, for closing up a few gaps here, which helps us get operational control of the border. It’s still a temporary measure, there’s still so much more work to be done.”

Still, Masters did see a large group of people cross into the US on Cocopah Tribal land.

“The cartels are in charge, the cartels have operational control. We saw…how big was the group we saw this morning?” he asks Supervisor Lines.

“We saw about 45 people coming across and was one group of 500 that’s come across since midnight,” replied Lines.

“So 500 people have just walked across,” said Masters.

Some of the things they left behind had a particular impact on the candidate.

“We picked up identification cards, Bangladesh, India. These people all have green cards that they pay Mexico to get, and then they just toss the green card away right before they hop over,” he observed.

Masters wants it to stop.

“Call me old fashioned, but the correct amount of illegal immigration is zero, maybe you can never actually quite get to zero, but man, that’s the goal.”

He takes an equally firm stance on those who enter the country legally as well.

Master said he thinks the US needs to cut back.

“Our legal immigration system is a mess too. I think we accept too many legal immigrants, over a million every year, in a country where already existing Americans are struggling,” he said.

Still, he doesn’t think we should exclude everyone.

“I want the world’s best and brightest to come here absolutely.

“When I talk to farmers, and ranchers, we need to do something with seasonal ag visas, and streamlining that process,” he said. “You’re not going to be able to get American teenagers in to do all the ag labor, so we do need other people from other countries to come here and do that, but I want to know who they are, properly registered, supervised.”

Masters believes current agreements are out of date, and unfair to Arizona.

“I think the master Colorado River compact is literally over a hundred years old. That thing was signed in 1922, so you won’t be shocked to learn that California gets the better end of that deal. So I think we need to renegotiate that whole agreement.”

A tech entrepreneur, he also believes in the power of innovation.

“I’m also a tech guy, I believe in technology. I believe the future is desal plants powered by nuclear energy. We need desal, we need pipelines, we need water harvesting, water vapor harvesting technology,” he said.

Masters said we have no choice but to get creative.

“We’re in the desert, we’re in a drought, we’re growing, this is not a great trajectory unless we innovate our way out of it.”

All are supporting him in his bid to unseat Democratic Senator Mark Kelly.

He also has the endorsement of former President Donald Trump.

However, Kelly maintains a healthy lead in the polls heading into the November 8th general election.

The incumbent also can boast a sizable campaign war chest.

*Listen to the full press conference above.

On Democracy Day, newsrooms draw attention to a crisis in the U.S. system of government