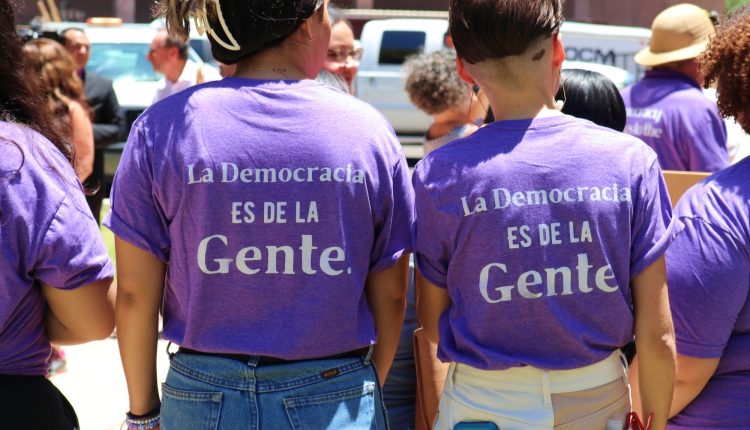 If you’re a Latino voter in Arizona, both Republican and Democratic candidates are ramping up their efforts to ensure their messages resonate with you. And for good reason, as Latinos make up around 32% of Arizona’s population and nearly one in four voters.

The Latino voting population in Arizona is far from homogenous, with varied backgrounds and social and political views. Some are recent immigrants, while others come from families that have been in Arizona for generations. Some primarily speak Spanish, while others don’t speak it often or at all. Latinos generally tend to lean Democratic, although there was a significant shift in Arizona and nationally toward Republican support in 2020.

“Latino voters are an influential voting bloc that can have tremendous, tremendous impact on election results up and down the ballot,” Nathalie Rayes, president of the Latino Victory Fund, told the Arizona Mirror.

And candidates on both sides of the aisle are making concerted efforts to reach Latino voters.

The Latinos for Lake Twitter page was also created in March, but didn’t begin posting regularly until July. It has steadily ramped up posting frequency and its posts in Spanish as the election draws nearer.

The Lake campaign and the head of Latinos for Lake, Yvette Serino, did not respond to multiple interview requests.

Both U.S. Senate candidates have also been working to win the Latino vote. Sen. Mark Kelly, a Democrat, started Latinos for Kelly in June, while GOP challenger Blake Masters launched the Hispanic Coalition for Blake Masters on Sept. 8.

Around 600,000 Latinos voted in the 2020 election in Arizona, and 71% of them voted for President Joe Biden, helping him win the state, according to a poll from the research group Latino Decisions.

But Democrats haven’t been taking their support for granted in the midterm election, having started a fully bilingual voter outreach program in summer 2021, the earliest the party has ever launched a midterm campaign in the state.

Lorenza Ramirez, statewide organizing director for the Arizona Democratic Party’s coordinated campaign, wanted to make sure campaigners were reaching out to voters in their preferred language from Day One.

Ramirez had already campaigned in Arizona for Biden in 2020, so she knew how important the Latino vote is here.

“What we saw was there was an enormous appetite for volunteer enthusiasm to engage in Spanish, but also that voters were incredibly receptive to receiving communication in the language that they prefer,” Ramirez told the Mirror.

The campaign’s volunteers reach out to voters through traditional door-knocking, calling and texting, with a mix of volunteers, some who are Spanish-dominant and some who communicate most often in “Spanglish,” a mix of English and Spanish used in households where one parent speaks Spanish and the other doesn’t, or in second- or third-generation homes.

“I can’t tell you how many times I have been canvassing or our volunteers, our organizers, have been canvassing and they hear from folks that they have not only never gotten a knock on their door, that they have never gotten a knock on their door from someone who spoke their language,” Ramirez said. “I think that trust that that builds is something that’s hard to quantify, but it makes me very confident that we will be successful in electing Democrats.”

The Arizona Republican Party got started much later than the Democrats on its outreach to Latino voters, launching “Operación ¡Vamos!” in April along with the National Republican Senatorial Committee.

The operation this week boasted that it had contacted its 250,000th voter, the most Latino voters the Arizona Republican Party said it had ever reached in a single election cycle. The GOP said it has been contacting voters in both English and Spanish.

“The energy and the Hispanic community are on OUR side,” the Arizona Republican Party said in a news release. “Hispanic voters know that their voice matters and that only Republicans will protect the American Dream. We look forward to building the Arizona first party of tomorrow that emphasizes every day that ALL Arizonans deserve better.”

The Arizona Republican Party did not respond to interview requests.

Democrats are generally the party of choice for Latino voters, but that hasn’t stopped Republicans from aggressively campaigning for their support.

Latinos for Lake has hosted several events around the Valley and in Tucson, and Lake has started publishing campaign announcements in both Spanish and English. In early October, she tried her hand at speaking Spanish herself in an ad that featured Mexican telenovela star Eduardo Verástegui, who took over for her in addressing voters in his native tongue.

“Our historic relationship building in Arizona Hispanic communities has taught us so much about what concerns this important, growing demographic,” Kelli Ward, Arizona Republican Party chairwoman, said in a statement. “Unsurprisingly, Republican values are Hispanic values, and our GOP nominees’ common sense approach to dealing with crime, inflation, and border security resonates across the board.”

Most Latinos still align more with Democrats on social issues, but recent polling shows that more than a third of the Latino electorate agrees with Republicans on issues of crime and policing, and four in 10 think Democrats have swung too far to the left on race and gender.

Both gubernatorial candidates have made missteps that probably didn’t endear them to the Latino community.

During a campaign event in September, Lake parroted former President Donald Trump, saying that the people coming across the Arizona-Mexico border “are bringing drugs, They are bringing crime. They are rapists, and that’s who’s coming across our border.”

But during a forum hosted by the Hispanic Chamber of Commerce earlier this month, Hobbs also stumbled. When the moderator asked her to give examples of what she’d learned from the Latino community, she hemmed and hawed before finally saying that “Arizona wouldn’t be Arizona without what the Latino community brings.”

It’s yet to be seen if Latino voters will continue to largely support Democratic candidates on Nov. 8, or if messaging from Republican candidates has swayed them.

In her views, those issues include jobs, the economy, access to health care, quality education, immigration and climate change.

A September Emerson College poll found that, while the majority of Latino voters still favor Democrats, they’re not doing so at the same rates as in the past, continuing the trend that began in 2020.

Most Latinos still align more with Democrats on social issues, but a poll from the New York Times and Siena College showed that more than a third of the Latino electorate agrees with Republicans on issues of crime and policing, and four in 10 think Democrats have swung too far to the left on race and gender.

But Latinos generally align more with Democrats on immigration, gun policy and climate change,  and they tend to think that the Republican party holds extreme views.

And with the economy as one of the top issues on the mind of Latinos this election, almost 60% of Latino voters view the Democratic party as the party of the working class.

Listen: How Does Human Composting Work?