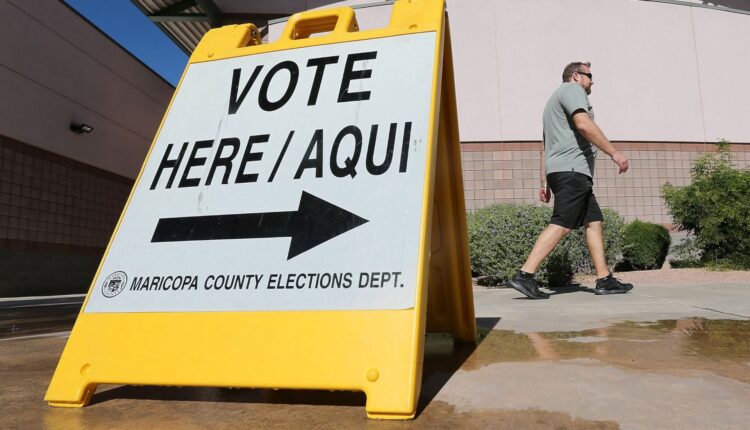 A GOP lawmaker wants voters to amend the Arizona Constitution to make it harder for voters in the Grand Canyon State to ever amend the Constitution again, an idea that critics say would erode Arizonans’ rights to direct democracy.

The resolution would ask voters to increase the approval rate needed to pass constitutional amendments to 60%, up from a simple majority.

“Too many times we’ve all seen our constitution changed, sometimes good, mainly for the bad and I would like to see that changed,” Sen. Anthony Kern, who introduced the resolution, told the Senate Elections Committee on Monday.

Kern said he chose a 60% threshold after voters approved an amendment in the last election requiring 60% voter approval for initiatives that would raise taxes.

He added that a motivating factor in this resolution was all the so-called “dark money” that Kern said is coming from California for campaigns to change the Arizona Constitution, but he didn’t mention any specific campaigns or amendments. Ballot measure campaigns must report where their money comes from, but they are allowed to accept unlimited amounts of money from contributors — including corporations.

Hugo Polanco, a lobbyist for progressive activist group Living United for Change in Arizona, said lawmakers should reject efforts to make it more difficult for voters to pass measures at the ballot box.

Polanco argued that the resolution would “inappropriately take away power from our Arizona voters and citizens,” adding that Arizonans have used the ballot initiative process to pass popular bipartisan policies that legislature refused to act on.

Sen. John Kavanagh, R-Fountain Hills, noted that most citizen initiatives that make it onto the ballot in Arizona are not constitutional amendments but changes to state statute, which would not be affected and would still win passage with a simple majority.

It is much more common for the legislature itself to forward proposed constitutional amendments to the ballot. There were several such measures on the ballot last November, including Proposition 131, which created a lieutenant governor position, and Proposition 129, which limits citizen-initiated ballot measures to a single subject.

But Polanco pointed out that this change could affect a possible upcoming citizen-led initiative to enshrine protection for reproductive and abortion rights in the Arizona Constitution.

Cassandra Tomei, a volunteer for the League of Women Voters, also spoke against the resolution, saying that it would “have significant negative effects on direct democracy in Arizona.”

She pointed out that 67 constitutional amendments have been put before voters since Arizona became a state and 40% of those have passed, including a citizen-led initiative that created an amendment giving women in the state the right to vote in 1912, eight years before it was legal nationally.

“This bill would limit direct democracy and allow the minority of voters to prevent changes in the constitution,” Tomei said.

She added that she believes it would also dampen enthusiasm for citizen-proposed constitutional amendment initiatives, since it would be more difficult to get them passed, making it more likely that only organizations with a lot of money would undertake such efforts.

Republican Fountain Hills town councilman Alan Skillicorn spoke in favor of the resolution, saying it is “nothing new and burdensome,” while representatives of the Fuerte Arts Movement and Sierra Club’s Grand Canyon Chapter both lobbied against the resolution.

The resolution passed the committee along party lines. It heads next to the floor to be considered by the full Senate.